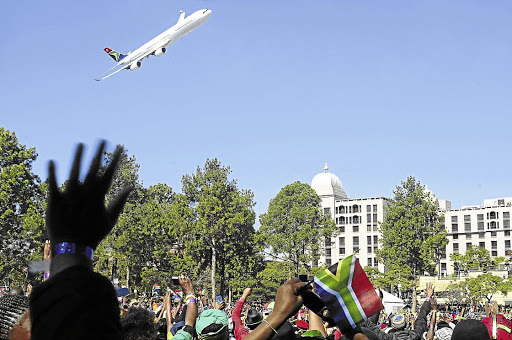 Almost the same debates and scenarios around privatisation versus nationalisation of state-owned entities were playing out 25 years ago as they are today.

SA’s "transition" often feels like what a laboratory mice treadmill looks like — a lot of running and what appears to be forward movement but the route travelled turns out to be cyclical, with the worn-out mouse remaining in the same place.

Nowhere can this allegorical journey be more appropriately applied than in respect of the debate and politics around the privatisation versus nationalisation of state entities, whether at national, provincial or local levels. Turn the transitional clock back over the past 25 years and almost exactly the same scenarios and debates were playing out then.

On one hand, an ANC-run state is pushing a selective privatisation agenda under intense practical and ideological pressure from international and domestic capital (alongside their public/civil society apparatchiks). On the other hand, it is defending selective state-owned entities as part of what is presented as a more interventionist "developmental state" and nationalisation agenda under somewhat less intense pressure from some within the ANC alliance, opposition parties and the public/civil society.

Whether in the past or the present, the claimed reasoning behind the privatisation and developmental state/nationalisation positions is similar: to "rescue" state-owned entities from financial problems, corruption and mismanagement; more efficiently and effectively deliver the relevant service or product and, in the process, help grow the economy for the benefit of all (with "the poor" always mentioned as the prime targets).

As contradictory as it might sound, that similarity of reasoning extends to a similarity of practice. This is because privatisation is not simply about the wholesale selling-off of state assets to the private sector. Rather, it is composed of (at least) three parts, each of which feeds into and shapes the next.

An initial corporatisation involves the state retaining full ownership of the core entity (with "noncore" components often being sold off) while the organisation of the asset becomes like that of a private corporation with legally separate identities (for example Pty Ltd), governance structure (for example boards) and the commodification of products or services. Good examples are Eskom and Transnet.

Then there is a more formalised and structured commercialisation, where the state retains either controlling or majority ownership but which involves, among other things: joint ownership, through private sector equity partnerships and/or issuing of publicly traded shares on the stock market; the widespread outsourcing of management and/or selected production and servicing components to private sector entities; and the elevation of profit-making to purposive primacy. Good examples here are Telkom, Denel and South African Airways.

A full-scale privatisation involves the complete transfer of ownership and control of the state asset (whatever form it has taken) to private sector players, either through the purchase of all shares or through a direct sale. A good example of this type of arrangement is the former Iscor, now Arcellor-Mittal.

Throughout the transition in SA the practice of the developmental state or nationalisation approach has fit comfortably within the parameters of the first two of the three component "stages" of the privatisation agenda. This is because of the inherent but incorrect assumption that informs such an approach — as long as the state has full or majority ownership of the entity, this translates into accompanying products or services being publicly delivered for the benefit of the majority of South Africans who are workers and the poor.

But in SA, regardless of full or majority state ownership, the corporatisation and commercialisation of state entities has most often practically meant the exact opposite. This has not only been the case in respect of corruption and mismanagement, but also in the massive increase in the prices of products or services, the retrenchment of workers and the unequal delivery of services between urban and rural as well as rich and poor residential areas.

On the other side of the coin is the equally false argument that the adoption of different forms of privatisation will result in less corruption and greater efficiency alongside enhanced and better-quality delivery of products and services.

Just like most of the developmental state/nationalisation imbongis, the privatisation zealots ignore the realities that provide evidence in contradiction to their fairy-tale worlds.

A multipronged Project on Government Oversight in the US published in 2015 found that "in 33 of 35 cases the federal government spent more on private contractors than on public employees for the same services". Also in the US, research by the National Nurses United in 2014 found that the average hospital cost to charge ratios for private hospitals in the US rose by 250% between 1996 and 2012.

When rail privatisation was first pushed through in Britain in the early 1990s, it was accompanied by promises of a higher-quality, cheaper service that would require much less (than state-owned railways) in the way of public subsidies.

Fast forward 20 years and a recent University of Manchester research study shows that "the privatised rail system requires billions more" in subsidies every year and "has failed to bring in adequate private investment … so that average age of rolling stock has actually increased".

Staying in Britain, a 2016 University of Greenwich study revealed that "consumers in England are paying £2.3bn more a year for their water and sewerage bills under the current privatised system than if the utility companies had remained in state ownership".

The research also found that none of the nine regional water and sewerage companies had invested any "significant new shareholder equity but extracted nearly all of their post-tax profit as dividends, while simultaneously building a growing pile of debt to finance investments".

The growing trend across the globe is returning privatised water entities to full public ownership and management, especially at the local or municipal level. Over the past decade this has included cities such as Accra, Bamako, Buenos Aires, Dar es Salaam, Berlin, Barcelona, Jakarta, Kampala, Kuala Lumpur and Paris.

A 2015 report from the Transnational Institute shows that since 2000 there were "235 cases of water remunicipalisation" in 37 countries.

Increasingly, people want more than what is on offer with the now stale, mostly elitist and self-constructed "choice" between privatisation and nationalisation. No longer will such a "choice" of limited forms of ownership and control, and thus possibilities of truly public, people-serving entities suffice.

As the explosion of newly structured republicised entities shows, more people — through public-public partnerships involving social movements, community organisations, trade unions and non-governmental organisations — are demanding real participation in decision-making, the prioritisation of social equity and meaningful transparency and accountability. The alternatives being fought for are not just about the degree of state or private ownership and control but about who is being served and how.

The South African debate is largely out of touch with these people-centred imperatives. Indeed, it is little more than a politically opportunistic exercise unless the state, and by extension state-owned entities, becomes defined and structured by inclusive democratic form and decommodified content.