David versus the Goliaths: a whistle-blower’s ongoing battle to hold SA’s financial and legal system accountable 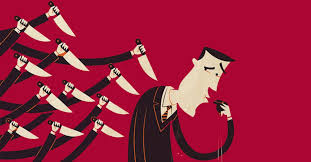 In a society that values principle, honesty and accountability things should not be this way.

Hitjevi Tjiroze is not a household name in South Africa but it should be.

Why? Because much of his single-handed, years-long battle with sections of South Africa’s financial and legal system is representative of the experiences of so many whistle-blowers as well as so much that is wrong in our country.

Tjiroze’s story is a long and complicated one, so let’s summarise the main parts.

It all started back in 2011 when Tjiroze was redeployed and promoted by his employer, Sanlam, from Windhoek to Johannesburg where he took up the position of a legal, compliance and business support manager. After three years of productive and well-received work (formally recognised by Sanlam), he did what any honest and principled person/employee should do when coming across possible impropriety and/or illegality – he blew the whistle.

In this case, Tjiroze, consistent with his position as a legal and compliance manager, had throughout 2014, discovered and reported on several legal and financial improprieties and infringements of the Financial Advisory and Intermediary Services Act (FAIS) involving Sanlam insurance representatives. Meetings were subsequently held with the concerned parties and superiors, and despite sustained and active attempts to push the matter under the carpet, the improprieties and infringements were eventually acknowledged, with the resultant financial benefits and bonuses being returned to the employer.

Much like what has happened in so many other whistle-blower cases though, whether in the public or private sectors, the guilty individuals were not fired nor brought up on criminal and/or civil charges. They simply received an effective slap on the wrist and continued as if none of this had taken place.

On the other hand, instead of being congratulated and affirmed, Tjiroze was, from that point on, vilified and sidelined by the guilty individuals as well as those negatively affected by his actions to prevent any further flow of ill-gotten gains. According to Tjiroze, throughout 2015 he became the target of constant workplace bullying and attempts to prevent him from carrying out his work of monitoring business activities with legal, compliance and/or business implications.

Unwilling to tolerate the ongoing abuse, he then lodged an internal grievance against the behaviour of two of his fellow management officers. While the grievance was partially resolved, there remained other aspects which Tjiroze wished to pursue. However, Sanlam, through the contested decision of a temporarily assigned regional general manager, flatly refused to allow the grievance process to continue/be escalated, despite Sanlam’s own policies to the contrary and Tjiroze’s appeals to Sanlam’s ethics committee.

Reflecting other whistle-blower stories, Tjiroze was subsequently given highly negative job performance ratings by the very people against whom he had laid the grievance. Instead of acknowledging and acting on the obvious conflict of interest, Sanlam opted to institute disciplinary proceedings against Tjiroze.

To rationalise this, Sanlam then employed one of the favourite tactics of those who refuse to accept responsibility and face the truth; deny the reality of the message, delegitimise the messenger and then go about trying to destroy both the message and the messenger.

Accordingly, it was now Tjiroze who was being “dishonest” by “misleading” his superiors, who had committed “fraud” as per the company’s grievance policy and who had “violated” the ethical code of conduct. Again, predictably, after a summary disciplinary hearing, he was dismissed, in March 2016, from his employment with Sanlam. Tjiroze was then forced to sit for seven months without being able to earn a living before he finally received approval from the Registrar of Financial Services Providers as an external and independent (financial services) compliance officer.

That approval was contingent on the outcome of Tjiroze’s immediate post-dismissal appeal to the Commission for Conciliation, Mediation and Arbitration (CCMA). In the event, in November 2016 the CCMA found that Tjiroze’s dismissal was “substantively unfair” and that there was no basis for concluding that Tjiroze had been dishonest, committed any fraud or violated any ethics code.

Noting that he was seeking compensation, not reinstatement, the CCMA instructed Sanlam to pay Tjiroze seven month’s salary. Sanlam failed to pay out Tjiroze within the specified time-frame, thus ensuring that the CCMA award was made an order of the court and forcing Sanlam to finally accede to a writ of execution effected by the sheriff.

One could understand why, at this point, Tjiroze might have wanted to leave things there, but that is not the end of the story. Moving on from his personal victimisation Tjiroze then immediately turned his focus on to the public regulator of his industry, the Financial Services Board’s Registrar of Financial Services Providers. Within days, he had filed a formal complaint with the then FSB’s (now called the Financial Sector Conduct Authority – FSCA) registrar based on the CCMA’s adverse credibility finding against Sanlam and its employees who had acted as witnesses against Tjiroze.

Tjiroze’s wholly understandable and legitimate concern/issue was to alert the registrar to possible violations of the FAIS Act related directly to the integrity and honesty of representatives of a financial service provider (in this case, Sanlam), from the very moment he blew the whistle. According to the FAIS Act, a representative of a financial services provider (FSP) who lacks the qualities of honesty or integrity poses a risk to the investing public.

Ergo, the purpose for which extensive powers of regulation and supervision have been conferred on the registrar in terms of FAIS is for the protection of the public. This is even more especially applicable to those who are the most vulnerable, like the hundreds of thousands of destitute ex-workers who continue to be denied payment of various financial benefits – mostly administered and controlled by large FSPs – due to them.

However, instead of at least making some attempt to fulfil its legal mandate, the registrar dismissed Tjiroze’s complaint, claiming that it had no jurisdiction over the matters raised. And yet, in complete contradictory fashion (think of many of the findings of the present public protector) the registrar also said that given the evidence presented it could find nothing wrong with any conduct of the implicated Sanlam employees or of Sanlam itself. Therefore, their respective “fit and proper” status remains unaffected and their requirements of “integrity and honesty” remain intact.

Tjiroze’s journey continued in late 2017 when he filed an appeal to the then FSB’s Appeals Board; not surprisingly, it was fairly quickly rejected. He then turned to the legal system and proceeded to lodge a review application with the High Court against both the Appeals Board and the registrar. Throughout 2018, the incredibly slow wheels of South Africa’s courts ground away as the (now) FSCA bodies played legal cat and mouse with Tjiroze, mixed in with a bit of institutional intimidation in the form of the threat of seeking a stay of proceedings and a costs order against him.

After all sorts of back and forth, a High Court hearing was held in June 2018, but the case was immediately postponed to August. Believing that the presiding judge was biased against him, given that the main respondents had failed to file their full applications for almost a year, Tjiroze proceeded to file a complaint against the judge with the Judicial Services Commission (JSC).

The case then wound its way through various High Court hearings and appeals during late 2018 and early-mid 2019. Along the way: the case file mysteriously “disappeared” from court records only to resurface on the day of a further hearing; the still to be finalised case was very strangely removed from the “unopposed” court roll and placed on the opposed roll; the complaint to the JSC against the judge was dismissed; and other judges were brought in to preside over case hearings.

Tjiroze then filed an urgent application for the recusal of acting Judge Marcus Senyatsi for alleged bias and conflict of interest involving relationships with the FSCA’s legal representatives, alongside an objection to Judge Senyatsi’s ongoing candidacy to become a permanent judge in the North Gauteng High Court.

And finally, just a few days ago, Tjiroze filed a notice of motion to the Constitutional Court for direct access, seeking an order to overturn previous High Court judgments/orders and for the recusal of acting Judge Senyatsi.

That’s where things presently stand after five gruelling years, and counting, of Tjiroze’s whistle-blower journey. Throughout, he has received hardly any institutional, legal or other support and his financial, as well as personal health, have taken heavy knocks. Unfortunately but predictably, these are the sacrifices that most whistle-blowers, however “big” or “small” the issue at stake, must make.

In a society that values principle, honesty and accountability things should not be this way.

Thank goodness then that we still have people – whether workers, activists, journalists, students, intellectuals and/or other professionals – Tjiroze being among them – who refuse to obsequiously bow down and remain silent in the face of what often seems to be an overwhelming tide of systemic crises, fed by destructive and reactionary personal and political-social behaviour.