The people, the party and the state: A critical left perspective on the Venezuelan crisis 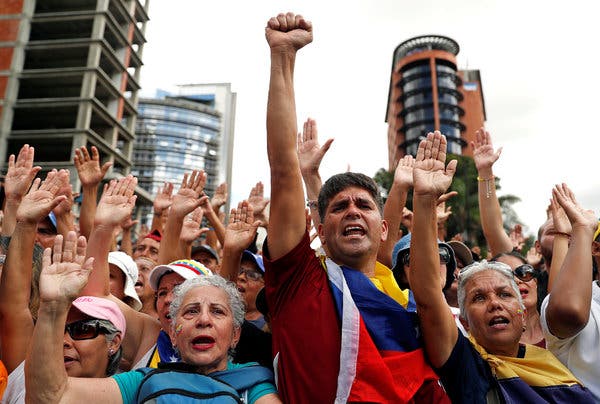 South African and international lefties and progressives are right to condemn the imperialist manoeuvring of the US and defend the right of the Venezuelan people to decide their own political and economic future. However, the mistakes of the past should not be repeated, such as those in the case of Mugabe/ZANU-PF’s Zimbabwe, Ortega/Sandinista’s Nicaragua, Dos Santos/MPLA’s Angola or indeed, the ANC’s South Africa.

The roots of the present political and socio-economic crisis in Venezuela are multi-pronged. 1

They are not, as much of the South African left and the ANC-run government would have it, simply to be found in the long history of imperialist geopolitics and right-wing capitalist rule that preceded the rise to political power of the late Hugo Chavez in 1998 and the pursuit of his accompanying “Bolivarian revolution”.

They are also to be found in the ways in which political power has been pursued and wielded by the post-1998 Bolivarian state and the ruling party (the United Socialist Party of Venezuela — PSUV), with Nicolas Maduro now in the driver’s seat. 2

As Mike Gonzalez so convincingly argues in his new book, The Ebb of the Pink Tide: The Decline of the Left in Latin America, any assessment of what has happened in Venezuela over the past 20 years must acknowledge that the initial and decidedly radical (anti-capitalist) politics of the grassroots-led, social movement resistance that carried Chavez to power did not translate into the same once state power was captured through the electoral process. 1

In both conceptual and practical terms what this meant, as has been the case in South Africa’s transition, was that “the logic of grassroots democracy didn’t fit with the logic of electoralism”. As a result, “the impulse from below was translated into the occupation of the state” wherein the movements’ demand for “a direct, participatory democracy” was replaced by “a new version of the representative system”. 1

Put another way, the political and ideological imperative — of a revolutionary strategy — is not simply to occupy and utilise the institutional power of the state, but to transform the way in which power is derived and used. Here, the state (and then only transitionally) becomes the vehicle, the property of the grassroots/people’s democracy and struggle, not the other way round.

In the case of Venezuela, the high oil prices during the early years of Chavez’s rule allowed for massive social spending, significant degrees of state support for grassroots collectives and formations as well as a very real decline in the levels of poverty for the majority. Here it must be noted that the Venezuelan oil industry had officially been nationalised in 1976, long before Chavez came to power; what Chavez did was to use oil industry revenues for radically different purposes. 3

However, the economic diversification that was promised and greatly needed given that oil accounts for the overwhelming majority of the revenue generated by the Venezuelan state and economy, did not happen in any sustained way. 1

At the same time, the nationalisations/expropriations of other industries were largely “purchases and often in reaction to the disinvestment or flight of a specific capitalist”, not the result of a longer-term anti-capitalist strategy. Such a strategy would have facilitated the socialisation of industries which could have opened the door to much wider socially useful diversification of the economy and democratic worker (not state or union) control of production and distribution. While more taxes and royalties did come flowing into the national budget, the relationship of the supra-state and more specifically the oil industry with the global capitalist market did not fundamentally change.

The combined result was that within a few years huge amounts of economic and political power were being concentrated within a still heavily bureaucratised state, and after 2007, in the upper echelons of the ruling party, the PSUV. Alongside this corruption, through the vehicles of patronage and clientelism, began to flourish and spread, precisely because the state itself and its core structural relationship with domestic and international capital remained largely unchanged.

As with so many other examples across the globe including South Africa, many of the new occupants of the state (in this case, Chavistas), regardless of whether they came from the ranks of the working class or not, gradually became co-opted by the state itself, and the ruling party in charge. 1

Instead of bringing the power and voice of grassroots organisations/social movements into the heart of decision/policy-making, it was the state and the party that largely took the lead, ensuring that the majority of “people’s representatives” carried out the decisions of the state and party. In turn, a deepening relationship of dependency developed between the state/party and the majority of the population of workers and the poor.

To his credit, but far too late, Chavez recognised much of this. In one of his last documents before his death in 2013, he admitted that “far from transforming the state, the state had transformed and corrupted” his government. 2

It was into this reality that then vice-president Nicolas Maduro entered, as the new leader of the PSUV and state (noting the very elitist, party-centric and anti-democratic parallel reality of Maduro being personally “chosen” by Chavez as his successor). Even though Maduro/the PSUV won the proceeding presidential elections, the underlying domestic problems have remained, along with a newer set of international political and economic realities that have only intensified the crisis. These have taken on a three-tiered form. 1

First, the fairly rapid collapse of global oil prices. This has, over the past two to three years, in particular, contributed to a huge decrease in state revenue generation and the accompanying devaluation of the national currency as well as a massive spike in the inflation rate. 1

Combined with the social and economic consequences of the more historic failure to diversify the economy as well as the self-interested siege tactics of the Venezuelan capitalist class, this has left Venezuela a virtual hostage to the political-ideological whims and economic warfare of the core capitalist countries, regardless of the closer, but ultimately fragile, ties forged with the likes of Russia and China

Second, a renewed offensive by the United States and other capitalist states globally and in the region to politically isolate the Maduro/PSUV government, back their domestic political opponents (largely in the form of opposition leader Manuel Guaidó) and put further barriers in the way of Venezuela’s access to capitalist commodity, trade and currency markets. While it is particularly clear that the Trump administration/US imperialism continues to “play its usual role” to access and control Venezuela’s natural wealth for the profit motives of US-multinationals, as Gonzalez points out, “the reality is that the choice is between several (even if differentially experienced) imperialisms”; American, Russian and Chinese. 2

And third, an increasingly commandist, corrupted and militarised style of governance. This was and continues to be underlain by a growing intolerance of internal criticism among the state and PSUV leadership alongside a rising arrogance of power towards many of those who are suffering under an ever-intensifying domestic socio-economic crisis of basic needs and services. The truth is that a significant section of the state/party leadership and bureaucracy have alienated themselves from the everyday lives of the poor and average working person. 4

One of the primary results has been a steady, if uneven, erosion of domestic political support for Maduro and PSUV from millions of working class and poor people. This is a reality which was the main reason why Maduro and the PSUV lost the 2015 election for the National Assembly not, as Maduro claimed, because of the “betrayal” or a lack of “loyalty” among poor and working-class Chavistas, a large number of who either stayed home or voted for the opposition. 2

There certainly have been, and to a lesser extent continue to be, attempts to “build popular power through projects [such as] neighbourhood communes and workers co-operatives”. However, much of this effort has foundered on an intensified bureaucratisation and a “lack of democratic control from below”. 2

South African and international lefties and progressives are right to condemn the imperialist manoeuvring of the US and defend the right of the Venezuelan people to decide their own political and economic future. 3

However, it is crucial that the mistakes of the past should not be repeated, such as those in the case of Mugabe/ZANU-PF’s Zimbabwe, Ortega/Sandinista’s Nicaragua, Dos Santos/MPLA’s Angola or indeed, the ANC’s South Africa. 4

Namely, to offer uncritical support and largely dismiss and/or turn a blind eye to: The corruption and capitalist lifestyle elitism of much of the leadership within the state and ruling party; the centralisation of authority and general bureaucratisation of the state; and, an intolerance of dissenting political views and activities of internal party/state critics and increasing numbers of workers and the poor. 2

In the wise words of Manuel Sutherland, a younger-generation Venezuelan leftie economist:

“The left should criticise the “progressive governments” with the same wisdom and insight that it applies to right-wing anti-working class regimes… There is no reason to ignore the problems that arise… the left should instead collaborate in an urgent search for meaningful proposals.” 2

“If the Titanic sank, there is no justification for denying the wreckage in the name of solidarity and anti-imperialism.” DM 3

Several of the arguments here are taken from Mike Gonzalez’s new book, The Ebb of the Pink Tide: The Decline of the Left in Latin America (Pluto Press, 2019)