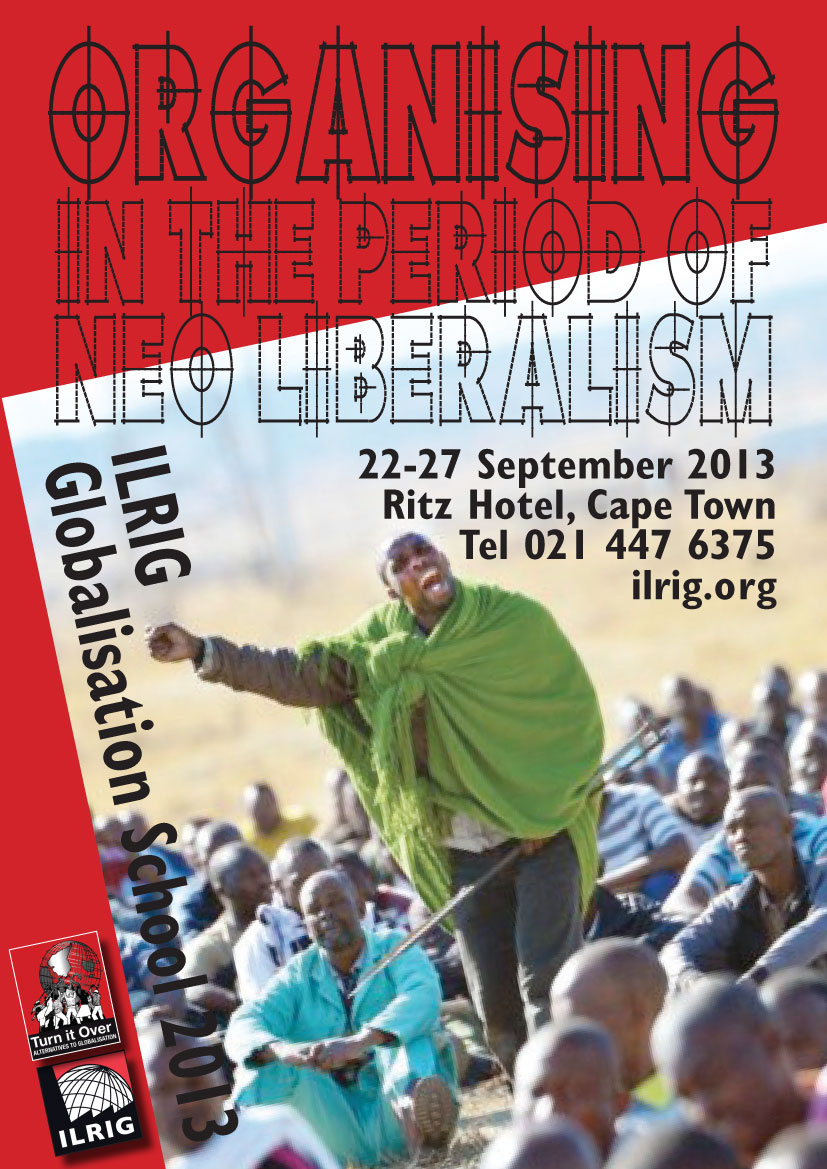 September sees the hosting of our 2013 annual political school. ILRIG has been hosting its political school since 2002. Activists from a wide range of organisations, including social movements and trade unions throughout Africa are invited to apply.

In South Africa after Marikana there has been an ongoing strike wave – from the platinum province, to the 2012 farm workers’ strikes in De Doorns, to the wildcat strikes in 2013.

A common feature of these strikes was that they were led and driven by self-organised workers’ committees – in defiance of the existing unions and of signed collective agreements made with these unions.

These strikes have joined the wave of community protests that have continued all over South Africa since the early 2000s. Something is stirring from below …the seeds of a new movement are possibly being planted.

Neo liberalism has not only been about privatisation and global speculation. It has also been about restructuring work and home. Today casualisation, outsourcing, work from home, labour brokers and other forms of informalisation have become the dominant form of work and shackdwelling the mode of existence of the working class. The latter is in direct proportion to the withdrawal of the state from providing housing and associated services.

By way of contrast the dominant trade unions have largely moved up upscale – towards white collar workers and away from this majority. While what is today the working class is largely a mass of working poor, informalised and casualised and eking out lives in urban and rural shanty towns, industrial trade unions continue to focus on the permanently employed while the struggles of community activists get too easily dismissed as “unorganised” because they do not follow our pre-conceived notions of what constitutes organisation.

Key challenges for the newer movements include:

Are these instances of self-organisation mere pre-cursors to the inevitable emergence of industrial trade unions, as they are known today, or are they new forms of collective bargaining which will call into question all the traditions, institutions, policies and legislative frameworks of the current system of labour relations?

How do workers achieve forms of collective bargaining given the extraordinary nature of these new forms and what are their strategic and tactical challenges if they are to revitalise the labour movement?

Are the new forms capable of forging common struggles with the on-going community revolts and thereby become a broader force for social justice?

AIMS OF THE SCHOOL

To look at the new waves of struggle in South Africa after the experience of state brutality at Marikana, and to reflect on the political implications of the new conjuncture.

To share experiences of organising and struggle amongst the newer self-organised committees that drove the strikes on the mines and farms in South Africa together with activists organising in other countries in Africa and elsewhere.

THE STRUCTURE OF THE SCHOOL

The school consists of open plenary sessions and cultural events and closed 3-day classes. Come and debate inputs by various speakers and guests and shares the experience of your organisation. Participants will participate in classes on the following topics:

How neo-liberalism has restructured the working class

New Forms of Organisation and Gender:

New forms and the relationship between workplace and community struggles

The Political School is open to all activists in South Africa and elsewhere in Africa that have an interest in developing alternatives to globalisation. ILRIG would especially encourage activists in strike committees, solidarity forums, trade unions, social movements and NGOs, who seek to build movements, to attend. ILRIG is committed to ensuring that there is a gender balance amongst the participants.

The International Labour Research and Information Group (ILRIG) began in 1983. We provide education, research and popular publications to trade unions and social movements.