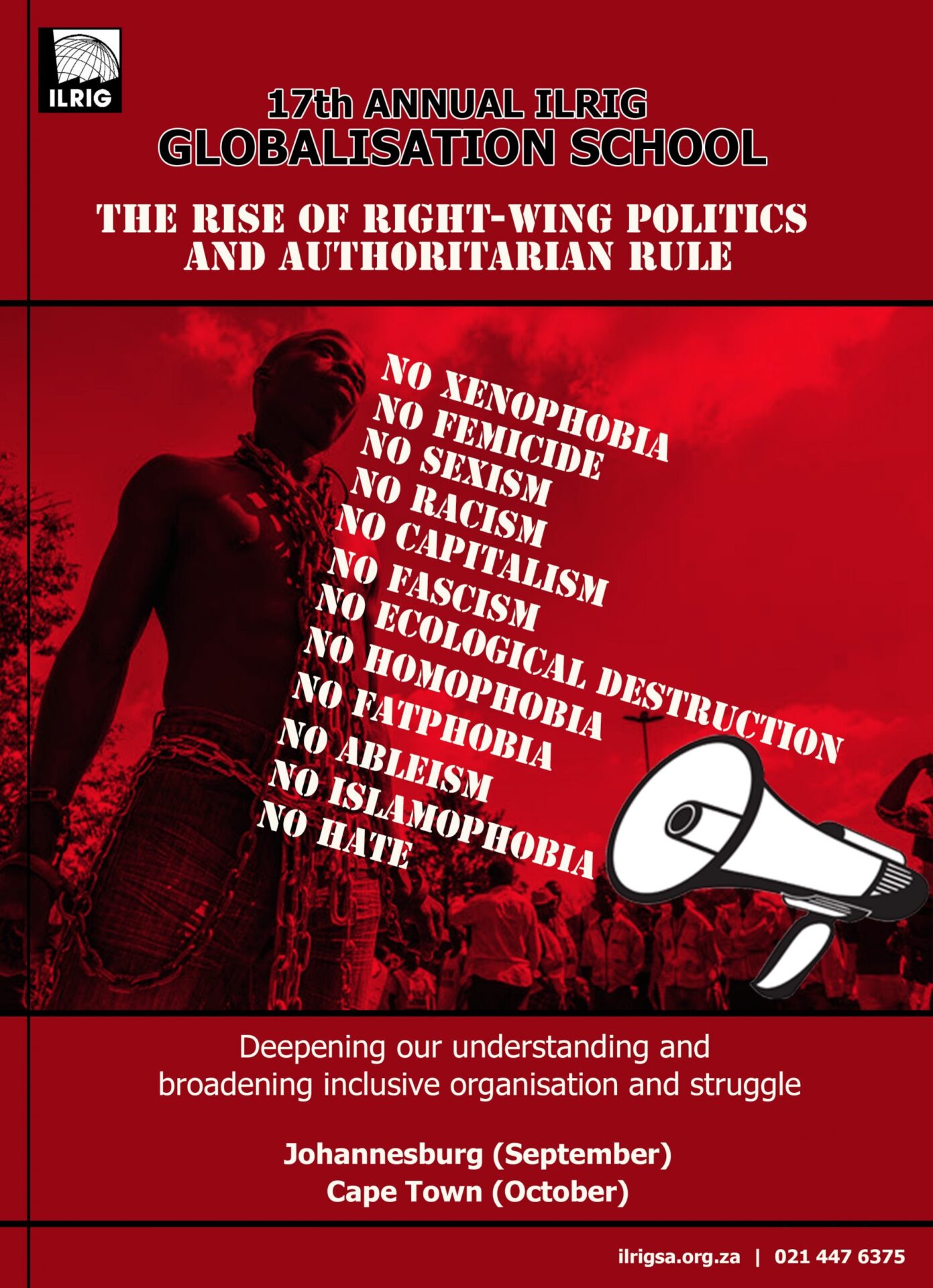 The International Labour Research and Information Group (ILRIG) welcomes all activists and organisations to our 2019 Political School. The title/topic for this year’s school is: ‘The rise of right-wing politics and authoritarian rule: deepening our understanding and broadening inclusive organisation and struggle. Not only is this a timely topic, given the general weakness of left/progressive forces and struggles, but it is also central to locating our present domestic and international political, economic and social realities and how best we can respond to them.

Right-wing politics and authoritarian rule have emerged in many parts of the world over the last many years, particularly since the worldwide crisis of capitalism in 2008. The neoliberal programmes that framed this crisis and its aftermath were, and continue to be, specifically designed to attack and break apart any unity and common struggle/purpose of the broad working class. Further, through the ‘gospel’ of unregulated growth and profit maximisation, to gradually destroy the social fabric of societies alongside the sustainability of our physical/natural environment. Unfortunately, there has been much success in this regard.

Besides the rapid weakening and corruption of trade unions, the broad working class itself has become more fragmented. Permanent jobs are now in the minority, having been overtaken by precarious work. Massive unemployment and precarious living are now the global norm while at the same time our world is suffering from ever-increasing and catastrophic environmental destruction and climate change. Coupled to this, the ruling classes around the world have largely succeeded in pushing the ideology of crass individualism and consumerism, which large sections of the broad working class have inculcated.

The core consequences of all this has been that left-wing, progressive politics and struggles – with the broad working class at the centre – have been seriously weakened and in many cases, de-legitimised in the eyes of the majority. It is within this national and international context that right -wing politics and authoritarian rule have arisen and expanded.

The common characteristics of this politics and rule include: hatred, reactionary nationalism, narrow identitarianism, social stereotyping, consistent lies and manipulation, grand spectacles and populist performance; class, racial and ethnic bigotry and division, misogyny/patriarchy, militarism and, an overall contempt for democracy.

This toxic brew has been presented as being ‘anti-establishment’ and in the interests of common people. But, the reality is that such politics are profoundly dangerous and frightening – they point to the possibility of a future not of inclusiveness, hope and greater egalitarianism; but of intolerance, greater societal division and conflict, self-interested cynicism and enforced inequality; all accompanied by systemic and individualised violence.

Given this reality, as left/progressive activists and organisations we need, more than ever, to deepen our understanding of the different components of right-wing politics and authoritarian rule. We must do so, not only so that we can become more effective in our conceptual and practical response/engagement, but so that our organisations and struggles (and indeed, ourselves as individual activists) can be more principled, broad-based and inclusive.

We thank you for joining us for what we trust will be a challenging, thoughtful and productive school. We hope that we can all go away with new ideas and practical approaches as well as positive energy and will. If we are going to effectively confront and defeat those people and forces that are rapidly driving our country and world over a cliff then we must surely offer, through practice/example, a completely different politics and ways of building organisation and engaging in struggle.