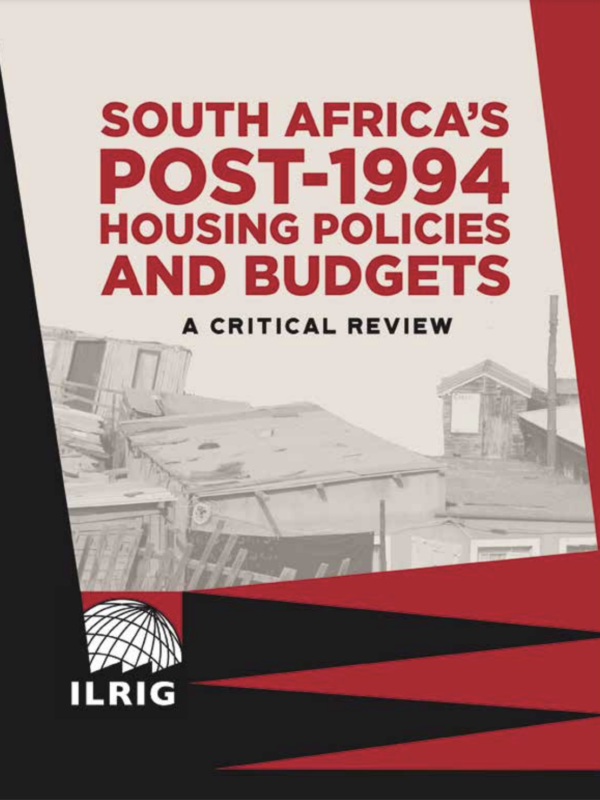 The provision of housing in South Africa has been and remains, one of the country’s biggest development challenges. This is not surprising, given that the enduring legacy of apartheid provides the backdrop for the associated policies and instruments introduced since 1994. Indeed, the ruling ANC government has consistently claimed that its housing policies have been adopted to address the key challenges of underdevelopment and discrimination emanating from decades of apartheid.

The reality however, is that those historic conditions of underdevelopment and discrimination, minus the specific racialised frame of apartheid laws, have largely remained intact for the majority of South Africa’s population (i.e. black workers and the poor) in the post-1994 era. One of the key reasons for this is because soon after 1994 the ANC government chose to turn its back on its promised commitments to ensure the public provision of affordable quality and accessible housing (amongst many other basic needs) as well as the equitable redistribution of opportunity and resources. In doing so, it chose to adopt socio-economic policies – such as GEAR, the Growth, Employment & Redistribution’ macro-economic programme – that embraced the privatisation and corporatisation of most all basic needs and services.

As a result, 27 years after the democratic breakthrough, the general living conditions of that majority are extremely poor, and the situation has been made worse by the ongoing ravages of the COVID-19 pandemic. There is a rapid increase in the number of those who are homeless and those who live in backyard shacks and informal settlements. In turn, this has led to ever-increasing land occupations, particularly in urban areas, as people desperately search for a place to live. Combined with growing rates of unemployment and crime, deteriorating health and education systems as well as increases in the prices of basic foodstuffs and services, what this points to is a deep seated and intensifying crisis in the overall living standards of the workers and poor, with tens of millions impoverished and growing inequality in South African society.

It is against such a contextual backdrop that this publication provides a post-1994 snapshot view of the ANC government’s housing policies, accompanying budgets and record of ‘delivery’. In so doing, it also briefly reflects on the consequent living conditions of the poor and marginalised in townships and informal settlements as well as associated struggles by affected communities. More specifically, the following is covered:

It is hoped that this publication will assist activists taking part in worker and community struggles involving land/housing and equip them with useful information and tools of analysis.