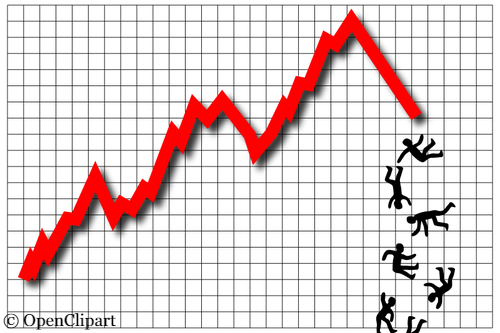 What the plunge in Chinese stock markets reveals

It was long ago stated that capitalism came into the world dripping in blood and dirt, from every pore, from head to toe. While it has demonstrated that it won’t simply collapse, the recent goings-on around the current capitalist crisis has shown that with age it has become even more hideous

The goings-on that have once again highlighted capitalism’s depravity, are the turmoil – starting in China – that has occurred over the last few weeks on stock markets; including the underlying causes that led to it, and the actions that the ruling classes have taken since then to try and alleviate it.

The recent volatility in world stock markets erupted in earnest in June 2015. In June, the Chinese stock markets began a plunge that has frightened the ruling classes (capitalists, top state officials, and politicians) across the globe. This plunge has not yet ended, and so far the Shanghai Stock Market has lost 40% of its value. In the wake of this, stock markets from New York to London have reeled; leading to a roller coaster ride of uncertainty.

In reaction to this turmoil, the ruling classes in many countries have used their control of states to try and stabilise the system: highlighting once again that the notion of a self- regulating free market is a fallacy, that the elite don’t believe or practice, but which they try and sell to the working class.

The Chinese state alone has spent perhaps as much as $ 240 billion since June 2015 to stem the bloodletting on the Shanghai Stock Market. All of this has so far been to little avail as stock prices have continued to decline – they will eventually reach a bottom, but no one knows for certain when.

It has not just been the Chinese state that has intervened in the wake of recent events, the US state also rushed to try and ease the concerns of speculators over the last few weeks. It did this by stating, in late August, that it would probably not raise interest rates yet. One of the ways that the US state has been assisting speculators since 2007 is by keeping interest rates at near zero. This has allowed speculators to borrow money cheaply to speculate on stock and bond markets in Africa, Asia and Latin America, which have been offering high returns.

All of these recent convulsions are, however, just symptoms of wider problems. Capitalism has been mired in a global crisis since the 1970s based on over-production and over-accumulation. Since the 1970s, productive sectors, like manufacturing, have been stagnating with profit margins becoming slimmer due to over-production. As a result, the portion of investment into manufacturing since then has declined, as capital has desperately sought out other outlets that offer better returns.

One of the few geographical places that seemed to have been immune to the global problem of over-production and over-accumulation was China. Due to extremely low wages, ruthlessly kept in place by the Chinese state, the manufacturing sector in China experienced a boom beginning in the 1980s.

By 2007, and in the wake of the global financial crisis, it became evident though that China was not immune. In 2007, exports from China plunged and it became apparent that China itself had excess manufacturing capacity and a problem of capital over-accumulation – at the time there was a real threat that massive amounts of products would have no buyers and thousands of factories would become idle. Two things, however, delayed the full impact of this at the time: there was a shift by Chinese capitalists towards massive speculation on the stock markets and in real estate – leading to growth in the GDP – and massive intervention by the Chinese state to purchase products, commodities, and boost the Chinese stock markets.

The story, however, is not new. States are central to capitalism, which has been evident in the wake of 2007, and again around recent events centred on China. Peter Kropotkin long ago stated that: “The state… and capitalism are facts and conceptions which we cannot separate from each other. In the course of history these institutions have developed, supporting and reinforcing each other. They are connected with each other”.

States, since the 1970s, have been intervening in very specific ways to try and create outlets for capital in order for capitalism to overcome the crisis of over-production and over-accumulation. In the past states, including in countries such as the US, intervened through heavily assisting corporations

One way states have been ‘intervening’ in the market, since the 1970s, has been through embarking on financial liberalisation. They have assisted capitalists by enabling them to create new areas of ‘investment’, including through floating currencies and encouraging trade in opaque financial instruments such as debt derivatives. In countries such as the US and South Africa states have also made it legal for companies to buy back their own shares to inflate prices. Other states, in the 1980s and 1990s, such as the Chinese state established stock markets for the first time (along with encouraging the emergence of much larger private sectors and embarking on some privatisation); thereby creating new outlets – even if unstable – for capitalists globally.

It is, therefore, states as instruments of the ruling class that have helped in engineering the explosion of the financial sector and speculation, including in China. Globally the financial sector and speculation has become massive – dwarfing productive sectors. For example, by 2014 the average daily speculation on currencies around the world had reached $ 5.5 trillion. This explosion of speculation has led to massive instability as since the 1970s there have been over 100 financial crises in different parts of the world.

Of course when speculative bubbles have burst, states have spent billions and trillions bailing out the rich. Indeed, when in deep trouble the ruling classes have always turned to their instrument of rule, the state, to bail themselves out. In the wake of the 2007 financial crisis it was estimated that the US state alone spent as much as $ 29 trillion bailing out speculators.

China too also has a history of assisting and bailing out corporations in specific ways. Its recent spree to prop up the Shanghai Stock Market is nothing new. In 2007, when demand for goods manufactured in the country declined, and it became clear China was suffering from a crisis of over-production, the Chinese state spent $ 4 trillion to create demand for goods.

The massive state intervention in 2008 and 2009 to try and curb the impact of the crisis has now run out of steam – meaning the crisis is returning in full force.

Officially, the Chinese state has claimed that GDP in the country is still growing at 7% annually. However, there is a widespread belief that this may be false, and that at best it is in the region of 4%, with manufacturing actually declining as seen, for example, in the July 2015 manufacturing purchasing managers’ index (PMI).

At least 19 sectors in China, in fact, have been hit by falling prices since 2013 due to over-production, including the steel, clothing, and ship-building sectors. In these sectors, prices have been cut to the point of often being below the cost of production – driving many companies into bankruptcy.

For countries that rely on exports of raw materials to China, like South Africa, the problem of over-production and over-accumulation in that country, and likewise globally, is bad news even beyond their stock, currency and bond markets. Since 2007, China has accounted for 40% of growth globally – without China the depth of the capitalist crisis would be even starker. China also accounts for over 10% of the global trade in goods. The slow-down in manufacturing in China is already beginning to hit other countries hard.

It is, therefore, also not an accident that South Africa’s economy shrunk by 1.3% in the second quarter of 2015. It is also not an accident that Chinese companies are dumping steel in countries such as South Africa – and thereby threatening steel companies based in South Africa – as due to overproduction Chinese companies are desperately looking to off-load steel even if that means selling it at below cost elsewhere. Even tougher times, therefore, look like they are ahead for China, the countries that export to it, and indeed the world (of course states and capitalists will try and assuage the impacts of this by creating another bubble somewhere else).

Globally, the crisis of over-production and over-accumulation is still with us – it has never been overcome. Rather, states have created speculative outlets for capital, and capital has used this to create bubbles over and over since the 1970s. When these periodically burst, the full brunt of the crisis of capitalism becomes evident again, as has happened with the events around the Chinese stock markets.

Like in past ‘financial’ crises since the 1970s, no doubt the ruling classes are going to use what has happened around the Chinese stock markets and the fallout to once again attack the working class. Indeed, every financial/economic crisis since the global crisis of capitalism first erupted in the 1970s has been used by the ruling classes to attack the working class.

There needs to be a massive defensive struggle against the further attacks that will follow in the wake of events in China and the fallout around it. A start already has been made. Massive protests and strike waves in many countries, including China, have been taking place since 2007, especially against austerity. In the current climate, these have to be built on – otherwise, the ruling classes will cut wages and welfare even further.

Nonetheless, at some point, such defensive struggles are going to have to be built into conscious revolutionary struggles to rid the world of the rotting system that is capitalism. Thus, while capitalism is a rank and vile system it will only be ended if the working class ends it. In doing so, the working class too will have to rid themselves of the states that so blatantly and ruthlessly prop modern capitalism up. Indeed, only when the working class has dismantled capitalism and the states that keep it in place – and replaced these with an economy based on meeting all people’s needs and a society run by all through federated worker and community assemblies and councils – will the torture of the working class at the hands of the ruling class be ended. Only then, will the wasteful use of resources to assist the richest people on Earth, while billions of people are mired and driven further into poverty, be a thing of the past.