Class struggle, the left and power: A libertarian socialist alternative 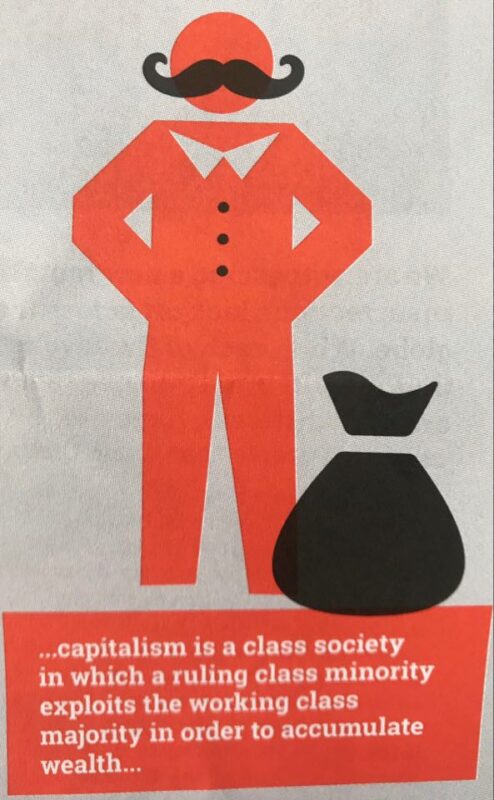 The first parts of this series gave readers a basic introduction to an ‘authoritarian’ or state socialist [Marxist] theoretical understanding of class, power and the nature of the state and the strategic implications and limitations thereof for forming the basis of a new movement and building working class unity in struggle.

Part three looks at a ‘libertarian’ or ‘anti-statist’ socialist [anarchist] theory of class, power and the role and nature of the state that offers an alternative theoretical basis for building new forms of organising and unity in struggle to the tried, tested and consistently disappointing statist one.

SOCIETY OF EXPLOITATION AND DOMINATION

Like Marxism an anarchist class analysis holds that capitalism is a class society in which a ruling class minority exploits the working class majority in order to accumulate wealth and power; and that it is able to do this because of private ownership of the means of production, legally recognised and protected by the state. However, while there is much agreement between libertarian and authoritarian socialists on the critique of capitalism as a class society based on exploitation there is disagreement around theoretical understandings of the state, class and revolutionary subject.

For anarchists capitalism is not just a system of economic exploitation – although that is a defining characteristic of capitalism – but also a society of domination. Domination occurs when a person or group of people (the dominator) have power over other people (the dominated) and can force them to do things in their own interests – which are different to the interests of the dominated.

There are different types of domination. For example, gender domination (patriarchy) occurs when men dominate women. Other forms of domination occur when, for example, whites dominate blacks, christians dominate muslims or one country dominates another. The main form of domination in capitalism is economic, when a minority of rich people dominate the working and poor majority. Central to this domination is the question of the state.

Contrary to what authoritarian socialists believe, for anarchists the state is not a neutral force that can be used either in the interests of the capitalists or the workers depending on who is in control of it. Since its inception the state, whatever the existing mode of production, has always been an instrument for perpetuating inequality and minority class rule and curtailing and exterminating liberty. Today the state has two fundamental objectives: to ensure the conditions for the production and reproduction of capitalism and to ensure its own legitimacy, continuity and control.

The authoritarians supported the capture of the state and the dictatorship of the proletariat as an intermediate stage – which was falsely called socialism – between capitalism and communism. The position of the libertarian socialists is that for the construction of socialism the state must not be captured but destroyed, together with capitalism, by means of the social revolution.

While sharing the belief that class struggle is absolutely central and relevant in society today libertarian socialists argue that, by identifying the urban industrial worker as the unique and historic revolutionary subject, Marxism has generally ignored and looked down on other categories of the exploited classes that, for the anarchists, are also potentially revolutionary subjects.

An anarchist class analysis includes in the camp of the exploited classes – which can and should contribute to the process of social transformation by means of class struggle – other categories that have in large part received the attention of anarchists throughout history. It is important to stress that anarchists do not consider as part of the exploited classes individuals who are in theory in peripheral areas, but that in practice establish relations of domination over others, thus becoming new centres. Hence the need for all the struggles of the exploited classes to have a revolutionary perspective, such that they don’t simply seek to turn parts of the peripheral areas into new centres.

Proceeding from this definition, there are two ways of thinking about social transformation: one, authoritarian, historically used by the heirs of Marxism (revolutionary or reformist) and another, libertarian, used by the anarchists.

Authoritarians think of the centre as a means, and orientate their politics towards it. For them, the centre – considering this to be the state, the party, the army, the union bureaucracy, the position of control – is an instrument for the emancipation of society, and the revolution means in first place the capturing of the centre and its power structure, or the creation of a new centre. The authoritarians’ very conception of class is based on the centre, when defining the permanently employed industrial proletariat as a historical subject and excludes and marginalises other categories of the exploited classes that are in the periphery like, for example, the peasantry, precarious workers and the so-called lumpen proletariat.

Libertarians do not think of the centre as a means, and struggle permanently against it, building their revolutionary model and their strategy of struggle in the direction of all the peripheries. That is, in its activity in the class struggle anarchism considers as elements of the exploited classes traditional communities, peasants, unemployed, underemployed, precarious workers, homeless and other categories frequently overlooked by the authoritarians.

The anarchist conception of the social forces behind social change is much more general than the Marxist formula. Unlike Marxism, it does not give a specific role to the industrialised proletariat. In anarchist writings we find all kinds of workers and poor, all the oppressed, all those that somehow belong to peripheral groups or areas and are therefore potential factors in the revolutionary struggle for social change.