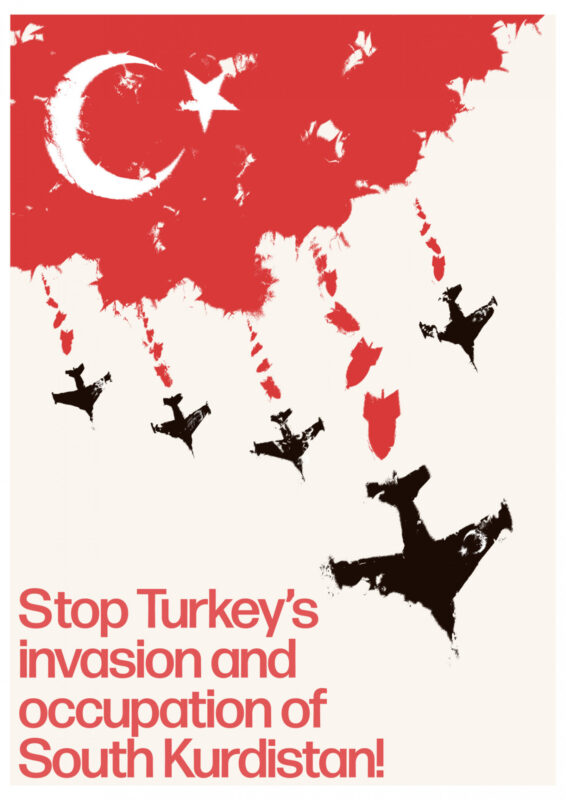 We – nearly 150 politicians, human rights advocates, journalists, academics, members of parliaments, political activists, ecologists, and feminists from all over Europe, world and Kurdistan– have been closely following the dangerous developments resulting from Turkey’s attacks on South Kurdistan (North Iraq) since the 23rd of April 2021. As a result, we have gathered in Erbil today and decided that we must speak out.

Many other organisations and individuals who cannot be here today for various reasons have also expressed their solidarity and support for the proclamation of our international initiative, DEFEND-KURDISTAN.

In April, the Turkish state initiated a new, wide-ranging military campaign in South Kurdistan in the regions of Matina, Zap and Avashin. Heavy battles continue in these regions, with the Kurdish guerrilla forces fiercely resisting this illegal invasion. These large-scale attacks target not only the Kurdish guerrilla forces, but also the achievements of the Kurdish people, with the aim of occupying South Kurdistan. To date, the response to these attacks on the international level has unfortunately been muted. Seizing on this silence, the Turkish regime has put in place their plan to occupy all of Rojava (the region of North and East Syria) alongside South Kurdistan. In so doing, Turkey is determined to ethnically cleanse this vast area – 1400 km long – from North-West Syria to the Iraqi-Iranian border. At the same time, Turkey is waging a drone war against the Maxmur refugee camp, a gross violation of international law. Connected to this policy of ethnic cleansing, the Turkish military also hopes to depopulate the Sinjar region, home of the Yazidis—and thereby achieve what ISIS could not.

Since the summer of 2012, the Kurds of Rojava and North East Syria have been working hand in hand with local communities of Arabs, Assyrians, Turkmens, and Armenians, having led a revolution together that established an Autonomous Administration that is democratic and empowers women. In response, Turkey has used jihadist militants to directly attack these areas of Rojava including Afrin, Azaz, Jarablus, Sere Kaniye and Gire Spi (Tal Abyad), in the hopes of occupying and destroying the achievements of this women’s-led Administration. During these ongoing occupations, Turkey has engineered demographic change, systematic rape, and enslavement of women, causing mass displacement of the large Kurdish and other civilian populations, as part of their strategy to Turkify and eventually annex these lands.

And the issues are not only abroad. In fact, the latest example of Erdoğan’s unrelenting hostility towards Kurdish political and social gains derives from within Turkey itself, and his attempt to shut down the Peoples’ Democratic Party (HDP). This is the latest step in a years-long campaign against the HDP – a progressive alliance of Kurdish, Turkish and many other democratic parties, organizations, and individuals – which has led to the imprisonment of over ten thousand HDP members.

Unfortunately, the Kurdistan Region (KRG) and the Iraqi government have done little to stop Turkey’s occupation attempt. In particular, it has been disappointing for us to see how Kurdistan Democratic Party (KDP) officials have even tried to legitimize the Turkish occupation. Whatever Ankara’s economic pressure might be, the KDP must not allow itself to be turned into a Turkish proxy, as the consequences of this war can be grave for all of Kurdistan and the region.

The world must also recognize that Turkey is attempting to carry out a genocide against the Kurdish people. And it is only the Kurdish resistance movement which is preventing the full occupation of Kurdistan and annihilation of the Kurd’s political rights. The current armed resistance in Zap, Avashin and Metina has turned Kurdistan into a stronghold of defiance, not just for the Kurds, but for all the people in the wider region threatened by Turkish neo-Ottoman expansionism. To this end, Turkish President Erdoğan has made no secret of his ambition to restore the lost glory of the Ottoman Empire by reconquering its former territory.

As such, parallel to Turkish military campaigns against the Kurds in Syria, Turkey, and Iraq, Erdoğan has meddled in various conflict areas, including Libya, Artsakh/Azerbaijan, Yemen, Niger, Nigeria, Chad, Sudan, Somalia, and Lebanon. Connected to this, are his threats against many nations, such Greece, Cyprus, Armenia, Egypt, the United Arab Emirates, and France.

We must also recognize that Erdoğan’s regime has a long track record of funding, arming, and supporting the Islamic State (ISIS) and various other similar violent jihadist groups, using them officially and unofficially as proxy forces to augment the Turkish state’s reach abroad. During the recent conflict in Artsakh involving Armenia, Azerbaijan, and Turkey, Erdoğan sent hundreds of jihadist proxy fighters from Syria to support Azerbaijan and has also sent these fighters to Libya to participate in the country’s protracted conflict. Through these actions, Turkey is violating the sovereignty of other countries, and spreading its mercenary terrorism throughout the globe.

Erdoğan is well aware of Turkey’s unique geopolitical position and exploits it to his advantage. He knows that his military, the second largest in NATO, is a formidable force and bulwark for the ‘West’. So, the Turkish state, under his rule, continues to openly and systematically defy international law and violate human rights conventions. Turkey continuously violates sovereignty of many countries. Meanwhile, NATO, the United Nations, the European Union, and the Council of Europe all respond with deafening silence. But the international community must be driven by morality not geo-strategy. And their failure to challenge Erdoğan’s authoritarianism and war crimes, effectively gives him permission to continue his military aggression. In turn, it also makes them a partly responsible conspirator in his ongoing destruction.

In order to achieve an immediate stop of the Turkish attacks on South Kurdistan and a withdrawal of all Turkish troops and Islamist mercenaries we demand the following:

Signatories of the International Initiative DEFEND KURDISTAN Against Turkish Occupation: