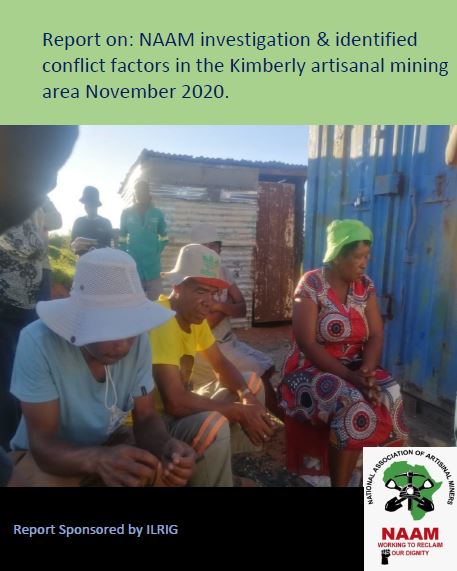 A report sponsored by ILRIG and prepared for the National Association of Artisanal Miners (NAAM) by its Chairperson Shawn “Paps” Lethoko.

Background to the report

The permitting of artisanal miners in the Kimberly region was a milestone in the development and formalisation of the sector. This project served as a beacon of light for other artisanal miners aspiring for formalisation. Marred by complex challenges, the situation requires an objective on-the-ground intervention.

The National Association of Artisanal Miners (NAAM) continues to engage with their constituency in Kimberly and visited the area for the 2nd time after artisanal miners on the ground reported about the violent operational crisis and complaints such as:

“Government has failed to support the program. The illicit market is still active in the area. In August the licensed legal artisanal miners’ operation was invaded by heavily armed mineral gangsters. It is suspected they are funded by local and international cartels. More than 600 artisanal miners were left destitute after they fled the area fearing for their lives. Threats of gender-based violence were reported by NAAM members in the area. Both male and female artisanal miners lost their income and as a result, many reported financial stress. Their families are breaking up and their assets are being repossessed because they do not have means to support their dependantschildren. More than 40 male and female artisanal miners have been squatting in one small house for refuge. They do not have enough food due to Covid-19 and the effects of lockdown, exacerbated by job losses due to criminal activity. Bathopele Artisanal Cooperative is on the edge of bankruptcy because of the violent invasion at their site of production”.

More than hundreds of jobs have stopped and artisanal miners and their families are living under dire conditions and poverty. Security and operations management is a big contributing factor to the crisis. Grievances related to intimidation, corruption and harassment have also been reported.

NAAM is a national organisation of men and women from mining communities who are practicing a subsistence form of work through self-regulation using rudimental tools to extract minerals to put bread on the table for themselves and their families. On the 27th November 2019 the DMRE invited NAAM to the meeting termed DMRE’s meeting of consolidating research into AM sector with a view to present concrete proposals to the Minister.

On the eve of COVID-19 lockdown level 3 on August 2020 the DMRE informed NAAM that the department is in the process of developing the Draft Artisanal and Small Scale Mining Policy (Draft ASM Policy), and invited NAAM delegates and other stakeholders to participate on the prior consultation to create a dedicated policy and legal framework for Artisanal Small Scale Miners, which is intended to share the initial proposals, project plan, timelines and to hear our initial views and submission on the subject.