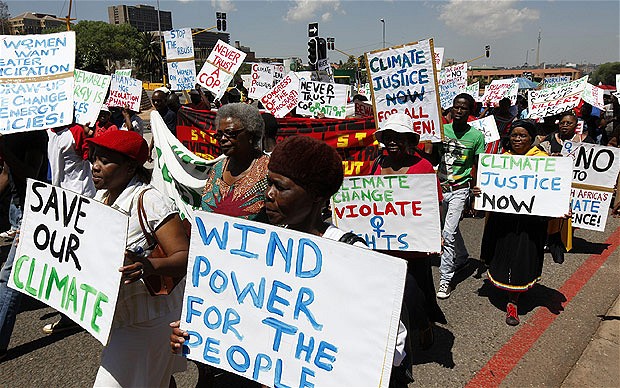 For the vast majority of the world’s population, climate change has become an ever-more integral, sizeable and destructive part of daily life. Despite this reality, for that same majority there remains a huge deficit of basic climate change information/facts, science, relevant policy issues as well as the more immediate responses and systemic alternatives needed.

This is where the media comes in.

The media in South Africa and elsewhere, with a few exceptions and mostly located in non-dominant spaces, have not done a very good job in reducing that deficit. Besides the general failure to engage in consistent, accessible and widespread coverage and dissemination of the basics mentioned above, the centring of climate change related experiences/stories of the most vulnerable, have largely been absent as well.

Many media scholars have argued that the so-called “mainstream” media has a poor track record of representing the interests and stories of the poor, exploited, marginalised and most vulnerable. However, as I and co-author Julie Reid argued in our 2020 book Tell Our Story: Multiplying Voices in the News Media, the term “dominant media” is preferred precisely because it is understood less in terms of the formal structures of media ownership or market share but more in respect of its content, which frames the direction of a dominant societal narrative.

This dominant media comprises the myriad (public and private) media reports, journalists, editors, articles, broadcasts and media outlets, which collectively shape the trajectory of public discourse on any particular issue towards the same or a similar cohesive understanding – ie, a dominant narrative.

That narrative emanates from the dominant media’s habitual reflection of an “elite bias”, which privileges and foregrounds the interests of a small segment of society that possesses political, social and economic power. The practical result in most cases is that the content and choices of the stories told replicate and reinforce the dominant discourses and thought in society.

As specifically applied to contemporary South Africa, it is crucial to locate all of this within a historical context. That context is foundationally centred on the systemic economic and social power and hierarchies of the colonial (apartheid) past, inclusive of and combining class, race, gender and sexuality.

Applying this to post-1994 South Africa, that power and those hierarchies were then superimposed onto the political “rule” of the new South African state. This fits neatly into the fundamentals of a capitalist neoliberalism, that has since remained the dominant domestic and global “developmental” frame.

The resultant “double dominant” frame – ie, thought/narrative and development – has allowed for the normalisation of South Africa’s incredible levels of violence/conflict, socioeconomic inequality and environmental destruction. Crucially, for this normalisation to be sustained, there is the need to constantly reproduce and disseminate a storyline of inevitability that validates the frame.

In other words, the inevitability of poverty, structural inequality, economic exploitation, environmental destruction, profit maximisation, corruption and racial, gender and sexual subjugation and discrimination. It is this contextual reality within which we can best understand and locate the character and content of the dominant media’s contemporary coverage of climate change.

Fortunately, there are many comprehensive empirical and analytical studies by scholars and journalists that speak directly to that coverage.

For South Africa’s Star and Mail & Guardian the percentage was only slightly higher at 0.3%.

In addition, Tagbo noted that the bulk of published articles were “culled from foreign institutions and researchers”, thus ensuring that “much-needed local angles [were] left out”.

Similarly a 2015 study of media coverage of climate change in Zimbabwe and South Africa by Henri-Count Evans of the University of Eswatini concluded that it was, “low and is linked more to international events, with few stories being relevant to regional climate change issues”. Additionally, the study found that “the reporters who cover climate change issues lack the training and specialised skills necessary to cover the topic satisfactorily”.

Most recent is Dominic Okoliko’s 2021 PhD dissertation at the University of Stellenbosch on, Media(ted) climate change in South Africa, Nigeria, and Kenya. Okoliko’s exhaustive research confirms the dominance of elite voices and views (especially from energy corporates and governments) in not only discussing/analysing climate change but in offering alternatives related to energy sources, policy, consciousness and education.

Importantly, he finds that most coverage ignores “the localisation of climate discourse through the experience of peoples affected by the impacts of climate change” and that a key “limitation to attaining inclusive climate change coverage … [is] the profit model of media organisations” which ensures “minimal newsroom attention”.

There are very few (and very small) alternative/non-profit media outlets in South Africa such as Groundup, Elitsha and Viewfinder, alongside rare exceptions in the dominant media such as Daily Maverick’s ‘Our Burning Planet’ project/series that deserve our accolades and support for their climate change knowledge and coverage.

However, there is much that needs to be done/change when it comes to the dominant media’s coverage of climate change. Among the most needed are:

Amid the unprecedented expansion of fossil fuel exploration and production across the globe (largely driven by developed capitalist economies), the government of the Democratic Republic of Congo (DRC) announced last month that they had approved the auctioning of a number of oil and gas exploration blocks in the heart of the world’s second-largest rainforest and largest tropical peatland complex. Those areas currently absorb a decade’s worth of global carbon emissions.

When asked about the main reasons for this decision, Tosi Mpanu, the nation’s lead representative on climate issues and an adviser to the minister of hydrocarbons, stated that the “sole goal … is to earn enough revenue” to help reduce poverty and generate economic growth.

“That’s our priority,” Mpanu said, “our priority is not to save the planet”.

You might have missed this hugely important news (for everyone who lives on this planet) because it was largely absent from South Africa’s dominant media landscape.

Dale T McKinley is a long-time political activist, researcher-writer and lecturer who works at the International Labour, Research and Information Group.