The Grapes of Wrath: A history of farmworker struggles in the wine sector 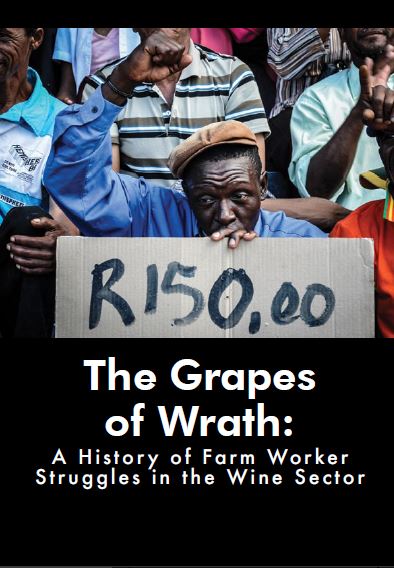 Farm workers in the wine sector face very bad work and living conditions. They are among the lowest-paid of any workers in South Africa. In the workplace, basic labour laws are regularly violated; illegal deductions are made to wages; workers are often not paid overtime and workers are indebted to farms’ stores – which in reality lowers the value of their wages.

In addition, the wealthier farms are mechanising, and reducing the need for permanent workers. Indeed, more and more casual, contract and migrant workers are being used, and as a result hundreds of thousands of farm workers and their families have been driven out of worker housing on farms. Many former worker houses have become cottages for tourists, and most workers in the wine sector now live in townships and informal settlements.

Where farm workers and their families remain housed on the farms, the standard of their accommodation is often very bad. Houses sometimes lack ceilings; walls are often cracked; roofs leak; and most houses have broken windows. In some cases, housing and accommodation even lack piped water, and if they do have piped water it could come in the form of unfiltered dam water.

Where workers do stay on the farms, owners and managers have a large degree of control of the workers’ and their families’ lives. They can, and do, withhold transport, access to health care and electricity to punish workers. Farm owners and managers also, at times, threaten to take away housing to ensure that workers are compliant – or even to extract extra labour out of them. Farm owners and managers can legally turn out family members of farm workers who are over 18 – and they often do so, breaking up family and support systems in the process.

Farm owners also continue to be paternalistic, treating farm workers as children in order to maintain control. This has a negative impact on workers’ mental wellbeing. Indeed, the aim is to break workers, so that they comply and are obedient.

Over and above this, workers face verbal or physical abuse at the hands of farm owners and managers. Racism is rife on many farms in the wine sector. Sometimes this racism is overt, but it can also be in the form of the paternalistic relationships the bosses and managers exercise over workers on wine farms.

Working conditions and living conditions are hard to the point that the average life expectancy of a farm worker is far below that of the rest of the population. In short, conditions for farm workers in the wine sector – whether they are casual, contract, or permanent – tend to be appalling and are defined by both overt and subtle forms of oppression.

Farm workers have, however, resisted these conditions and have not always been helpless victims. In 2012/13 a massive strike took place – including in the wine sector – that saw some major gains which included an increase in wages. Workers in the wine sector have faced a class war from bosses and managers who have tried to pay as little as possible, have spent as little as possible on workers’ housing and have driven workers and their families out of farm-based housing. Yet, even under these attacks workers have resisted, and it is here that hope lies.