Where have all the soldiers gone? 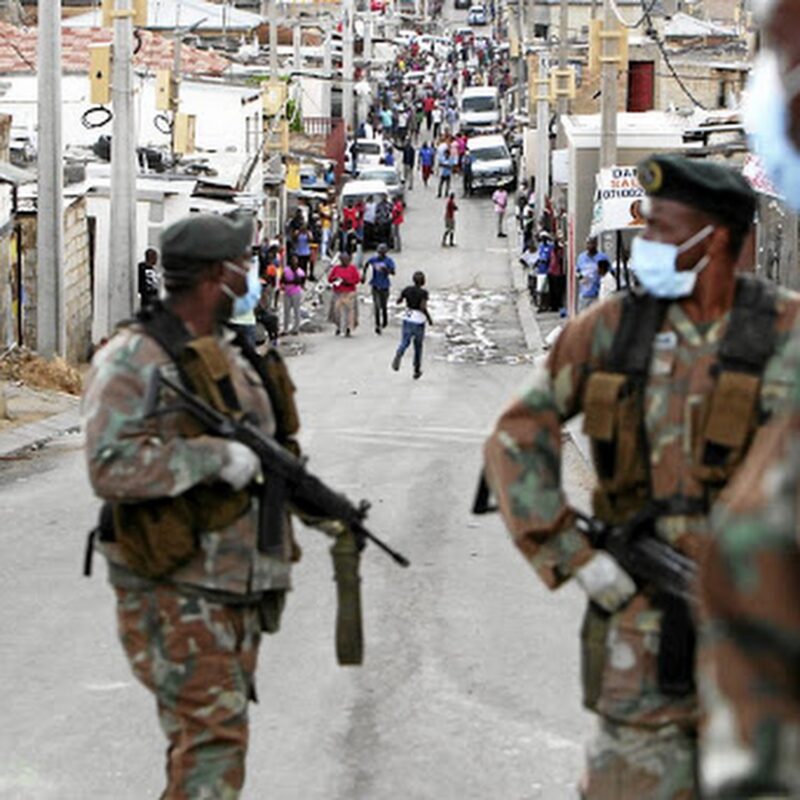 Where have all the soldiers gone? No, that is not the suggested title for a new South African Covid-19 folk ballad (although that’s not a bad idea), but it is a valid question that needs to be addressed.

When President Ramaphosa announced the first 3-week, lockdown on 23rd March he informed the nation that the South African National Defence Force (SANDF) would be deployed to support the police “in ensuring that the measures we are announcing are implemented”. A couple of days later and Ramaphosa got a bit more specific. He informed the speaker of the National Assembly that 2820 SANDF members would be deployed from March 26 to June 26 and their purpose would be, “to maintain law and order, support the state departments and to control our border line to combat the spread of Covid-19”. The cost of this deployment was set at around R641 million.

Not surprisingly, many eyebrows were raised and questions asked about the practical need for the deployment, the financial costs and the possible legal and rights-related consequences of the military being involved in domestic, civilian matters. Arguably though, the majority of the population appeared, even if somewhat uncomfortably, to accept the deployment given the extraordinary circumstances of the pandemic.

No sooner had the lockdown started than our TVs as well as print and social media were flooded with images of SANDF equipment and personnel out on the streets in force. Within a few days numerous reports began to surface in the media and through a variety of civil society and community organisations (including the C-19 People’s Coalition – C-19PC), of soldiers being involved in harsh and often violent behaviour.

Videos and pictures emerged of township residents being forced, at gun point, to do physical exercises in public spaces. Others showed soldiers hitting and kicking people who had evidently been in violation of one or another of the strict regulations. One media report detailed how soldiers entered a home in Eerste River where they not only assaulted the inhabitants but stuck a gun in the mouth of the home-owner. In another incident reported through the C-19 PC Anti-Repression Working Group’s online form (which includes reports made to the Lawyers for Human Rights hotline), a Soweto man was assaulted inside his own yard by soldiers and police, suffering broken ribs.

And then on 10th April came what many no doubt had considered an inevitable outcome of sending the military into poor, high-density communities with historically negative experiences when it comes to the coercive forces of the state and where adhering to many of the lockdown regulations is practically impossible. After a sustained and particularly brutal assault by several SANDF soldiers, Alexandra resident Collins Khoza died. The by now well-known judgement in the civil case subsequently taken up by the Khoza family against the state, was handed down over a month later on 15th May.

And yet, in the midst of the general avalanche of information and reports that has been coming down on us since the start of the lockdown it is easy to miss the fact that since those horrible events on 10th April the SANDF seems to have all but disappeared from the scene. Things have been further obscured by the regular conflation of the SAPS and the SANDF in most reporting and analysis.

This reality has taken on an even more curious character given President Ramaphosa’s 21st April decision “to employ an additional 73,180 members of the SANDF … until 26 June 2020 at a cost of R4.59-billion”. Defence Minister Mapisa-Nqakula’s next day presentation to Parliament’s Joint Standing Committee on Defence did little to clear things up. While the Minister listed a range of “tasks” for the SANDF, including roadblocks/patrols, medical screening, essential service delivery and deploying field hospitals, there were no specifics offered as to the numbers of personnel involved, areas of deployment, dedicated projects, expected expenditure or means of verification.

When in early May, the Independent Police Investigative Directorate (IPID) revealed the deaths of 11 people as a result of actions by security forces between 27 March and 5 May, how many took note that all but one – Collins Khoza – were ascribed to SAPS? And who noticed that since mid-May, when the Military Ombudsman revealed it had received 32 complaints from the public about the conduct of soldiers during the lockdown, there have been no further complaints reported and no specific enquiries (unless done in secret) from the media or civil society about any additional complaints?

In the media, the only lockdown-related stories specifically related to SANDF actions that we could find over the last month were: a 3rd June report of a soldier caught in Limpopo with a consignment of ‘illegal’ cigarettes; a 5th June report of soldiers from 10 SA Infantry Battalion who underwent a four-day shotgun training refresher course (evidently so they can better use these indiscriminate weapons for crowd control purposes) at the Youngsfield military base; and, a 12th June report detailing the arrest of SANDF Warrant Officer, Bhekinkosi Victor Makhathini from the Mtubatuba Military Base, in KwaZulu-Natal, for allegedly soliciting a R50,000 bribe in order to process the death claim of an SANDF member.

An exhaustive search for any other SANDF-related news and/or incidents turned up two more references, neither of which received any further public exposure. In a 15th June DefenceWeb article Chief of Defence Reserves, Major General Roy Andersen, was quoted as saying that the Reserves are busy (as part of the C-19 Operation Notlela deployment) with “working on … water purification, bridge building, water tank delivery … [and] putting their medical expertise and training to good use”. No further specifics were offered. And, a SANDF Facebook post on 19th June noted that the ‘Area Military Health Unit Western Cape’ helped police carry out a -19 ‘Safety Precaution Awareness Campaign’ in Dunoon.

Meanwhile, the SANDF top brass continue to do their best to impersonate ex-President Zuma’s behaviour when it comes to avoiding any meaningful accountability. Just this last Thursday (18th June), SANDF Chief, General Solly Shoke failed to pitch up for a scheduled appearance in front of Parliament’s Joint Standing Committee on Defence (JSCD). No explanation was offered. This follows the earlier antics of SANDF Chief of Staff, Lieutenant General Lindile Yam, who told the JSCD in late April that, “you’re not our clients, we are not the police … we take instructions from the commander-in-chief”.

The point is not that the SANDF has less to answer for or that their actions have been less blameworthy. Rather, it is that for the better part of two months now, it would appear as though the soldiers have largely retreated into the shadows and/or returned to their barracks. Coupled to this is the clearly conscious aversion (bordering on contempt) to democratic oversight and control displayed by the leadership of the SANDF.

There are so many questions. Where are those 70 000+ military personnel? What exactly are they doing? How much of the dedicated budget has been spent and on what? What is happening to all the complaints sitting on the desk of the Military Ombudsman? What will happen when the formal period of deployment ends on 26th June?

In a nutshell, where have all the soldiers gone?