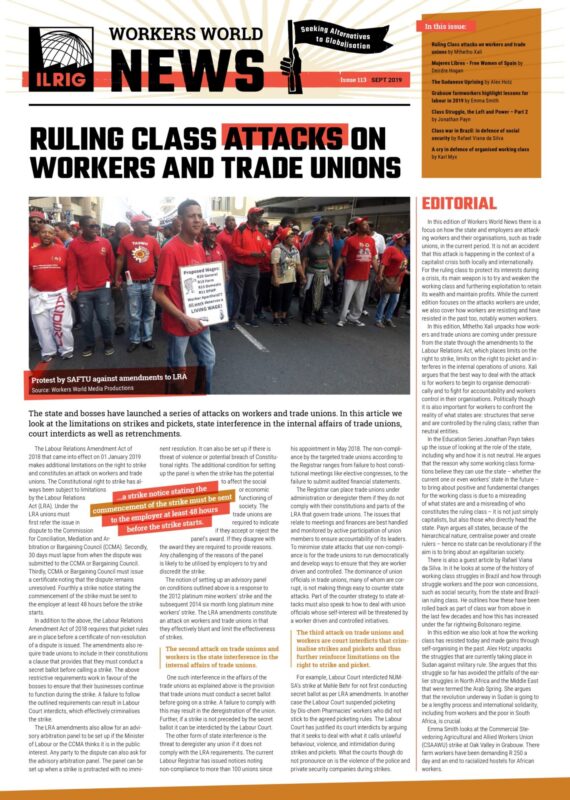 In this edition of Workers World News there is a focus on how the state and employers are attacking workers and their organisations, such as trade unions, in the current period. It is not an accident that this attack is happening in the context of a capitalist crisis both locally and internationally. For the ruling class to protect its interests during a crisis, its main weapon is to try and weaken the working class and furthering exploitation to retain its wealth and maintain profits. While the current edition focuses on the attacks workers are under, we also cover how workers are resisting and have resisted in the past too, notably women workers.

In this edition, Mthetho Xali unpacks how workers and trade unions are coming under pressure from the state through the amendments to the Labour Relations Act, which places limits on the right to strike, limits on the right to picket and interferes in the internal operations of unions. Xali argues that the best way to deal with the attack is for workers to begin to organise democratically and to fight for accountability and workers control in their organisations. Politically though it is also important for workers to confront the reality of what states are: structures that serve and are controlled by the ruling class; rather than neutral entities.

In the Education Series Jonathan Payn takes up the issue of looking at the role of the state, including why and how it is not neutral. He argues that the reason why some working class formations believe they can use the state – whether the current one or even workers’ state in the future – to bring about positive and fundamental changes for the working class is due to a misreading of what states are and a misreading of who constitutes the ruling class – it is not just simply capitalists, but also those who directly head the state. Payn argues all states, because of the hierarchical nature, centralise power and create rulers – hence no state can be revolutionary if the aim is to bring about an egalitarian society.

There is also a guest article by Rafael Viana da Silva. In it he looks at some of the history of working class struggles in Brazil and how through struggle workers and the poor won concessions, such as social security, from the state and Brazilian ruling class. He outlines how these have been rolled back as part of class war from above in the last few decades and how this has increased under the far rightwing Bolsonaro regime. In this edition we also look at how the working class has resisted today and made gains through self-organising in the past.

Alex Hotz unpacks the struggles that are currently taking place in Sudan against military rule. She argues that this struggle so far has avoided the pitfalls of the earlier struggles in North Africa and the Middle East that were termed the Arab Spring. She argues that the revolution underway in Sudan is going to be a lengthy process and international solidarity, including from workers and the poor in South Africa, is crucial.

Emma Smith looks at the Commercial Stevedoring Agricultural and Allied Workers Union (CSAAWU) strike at Oak Valley in Grabouw. There farm workers have been demanding R 250 a day and an end to racialized hostels for African workers.