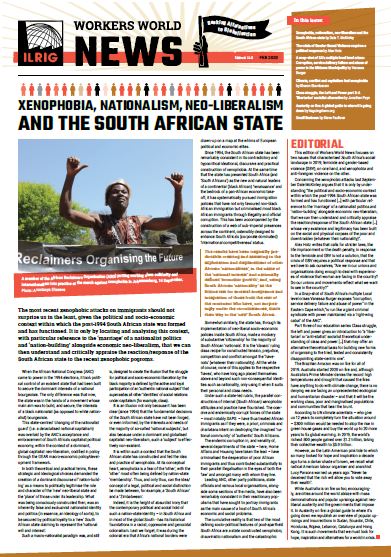 This edition of Workers World News focuses on two issues that characterised South Africa’s social landscape in 2019; femicide and gender-based violence (GBV), on one hand, and xenophobia and anti-foreigner violence on the other.

Concerning the xenophobic attacks last September Dale McKinley argues that it is only by understanding “the political and socio-economic context within which the post-1994 South African state was formed and has functioned with particular reference to the ‘marriage’ of a nationalist politics and ‘nation-building’ alongside economic neo-liberalism, that we can then understand and critically appraise the reaction/response of the South African state whose very existence and legitimacy has been built on the social and physical corpses of the poor and downtrodden (whatever their nationality)”.

Alex Hotz writes that calls for stricter laws, like life imprisonment or the death penalty, in response to the femicide and GBV is not a solution, that the crisis of GBV requires a political response and that we have to ask ourselves, “Are we in our unions and organisations doing enough to deal with experiences of violence that womxn are facing in the country? Do our unions and movements reflect what we want to see in the country?”

In a Snap-shot of South Africa’s multiple Local level crises Vanessa Burger exposes “corruption, service delivery failure and abuse of power” in the Eastern Cape which,“is run like a giant criminal syndicate with power maintained via a ‘right-wing cabal’ of the ANC”.

Part three of our education series Class struggle, the left and power gives an introduction to “a ‘libertarian’ or ‘anti-statist’ socialist theoretical understanding of class and power […] that may offer an alternative theoretical basis for building new forms of organising to the tried, tested and consistently disappointing state-centric one”.

The Brazilian Amazon was on fire for all of Australia started 2020 on fire and, although Australia’s Prime Minister denies the record high temperatures and drought that caused the fires have anything to do with climate change, there is no denying we are facing an unprecedented ecological and humanitarian disaster – and that it will be the working class, poor and marginalised populations and communities that bear the brunt.

According to UN climate scientists – who give us 12 years to completely turn the situation around – $300 million would be needed to stop the rise in green house gases and buy the world up to 20 more years to fix global warming. In 2019, the world’s richest 500 people gained over $1.2 trillion, taking their collective wealth to $5.9 trillion.

However, as the Latin American pink tide to which so many looked for hope and inspiration a decade ago turns a darker shade of brown, we recall what radical American labour organiser and anarchist Lucy Parsons warned us years ago: “Never be deceived that the rich will allow you to vote away their wealth”.

While Australia is on fire so too, encouragingly, are cities around the world ablaze with mass demonstrations and popular uprisings against neoliberal austerity and the governments that impose it. In Austerity on fire: a global guide to where it’s going down we republish an overview of popular uprisings and insurrections in Sudan, Ecuador, Chile, Honduras, Rojava, Lebanon, Catalunya and Hong Kong. It is such movements that we must look for hope, inspiration and alternatives for a world in crisis.