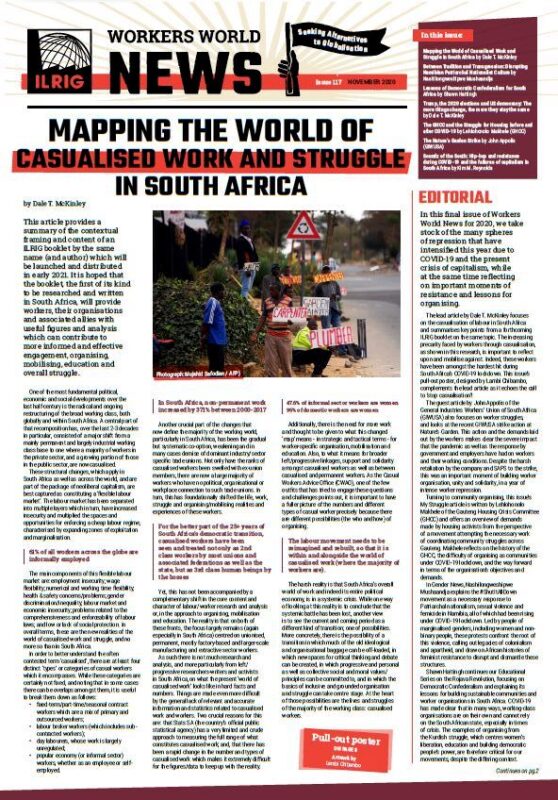 In this final issue of Workers World News for 2020, we take stock of the many spheres of repression that have intensified this year due to COVID-19 and the present crisis of capitalism, while at the same time reflecting on important moments of resistance and lessons for organising.

The lead article by Dale T. McKinley focuses on the casualisation of labour in South Africa and summarises key points from a forthcoming ILRIG booklet on the same topic. The increasing precarity faced by workers through casualisation, as shown in this research, is important to reflect upon and mobilise against. Indeed, these workers have been amongst the hardest hit during South Africa’s COVID-19 lockdown. This issue’s pull-out poster, designed by Lambi Chibambo, complements the lead article as it echoes the call to ‘stop casualisation’!

The guest article by John Appolis of the General Industries Workers’ Union of South Africa (GIWUSA) also focuses on worker struggles, and looks at the recent GIWUSA strike action at Nature’s Garden. This action and the demands laid out by the workers makes clear the severe impact that the pandemic as well as the response by government and employers have had on workers and their working conditions. Despite the harsh retaliation by the company and SAPS to the strike, this was an important moment of building worker organisation, unity and solidarity, in a year of intense worker repression.

Turning to community organising, this issue’s My Struggle article is written by Lehlohonolo Makhele of the Gauteng Housing Crisis Committee (GHCC) and offers an overview of demands made by housing activists from the perspective of a movement attempting the necessary work of coordinating community struggles across Gauteng. Makhele reflects on the history of the GHCC, the difficulty of organising as communities under COVID-19 lockdown, and the way forward in terms of the organisation’s objectives and demands.

In Gender News, Nashilongweshipwe Mushaandja explains the #ShutItAllDown movement as a necessary response to Patriarchal nationalism, sexual violence and femicide in Namibia, all of which had been rising under COVID-19 lockdown. Led by people of marginalised genders, including women and non-binary people, these protests confront the root of this violence, calling out legacies of colonialism and apartheid, and draw on African histories of feminist resistance to disrupt and dismantle these structures.

Shawn Hattingh continues our Educational Series on the Rojava Revolution, focusing on Democratic Confederalism and explaining its lessons for building sustainable communities and worker organisations in South Africa. COVID-19 has made clear that in many ways, working-class organisations are on their own and cannot rely on the South African state, especially in times of crisis. The examples of organising from the Kurdish struggle, which centres women’s liberation, education and building democratic people’s power, are therefore critical for our movements, despite the differing context. If the South African left can learn from the radical experiment taking place in Rojava, we can build truly democratic and lasting counter-power so that we can both strengthen our resistance to repression by the state and capital, while also crafting a new world.

In the midst of the social, economic and environmental upheaval of 2020 and the fact of the United States of America’s global hegemony and imperialism, many in South Africa and the world have had their eyes on the US elections. In International News, Dale T. McKinley offers an analysis of the Biden-Trump election and its many predictabilities, urging us to look deeper at the underlying structural realities, highlighting the need for vigilance and continued resistance.

Finally, 2020 has shown that in moments of crisis we often turn to cultural workers to interpret and make sense of the time that we are in. On this issue’s Cultural Page, Kim M. Reynolds provides a review of the latest single For Power by hip-hop group Soundz of the South, and of the accompanying music video. For Power expounds the failures of capitalism and the ways in which COVID-19 and lockdown have exacerbated these. Both the song and music video, notes Reynolds, point us to ‘the urgency of punching upwards at the larger system(s) and doing so collectively’.

At the same time as the articles in this issue show the intensified repression of the working class by the state and capital in 2020, they also underscore the ongoing and unwavering resistance by the oppressed- from workers and communities, to feminists and artists. We must continue to learn from and be in solidarity with these struggles!