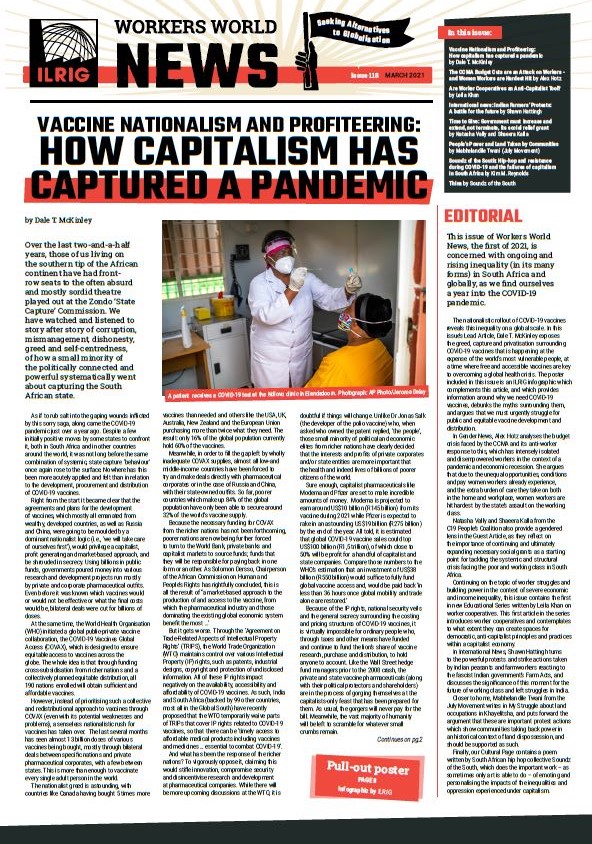 This issue of Workers World News, the first of 2021, is concerned with ongoing and rising inequality (in its many forms) in South Africa and globally, as we find ourselves a year into the COVID-19 pandemic.

The nationalistic rollout of COVID-19 vaccines reveals this inequality on a global scale. In this issue’s Lead Article, Dale T. McKinley exposes the greed, capture and privatisation surrounding COVID-19 vaccines that is happening at the expense of the world’s most vulnerable people, at a time where free and accessible vaccines are key to overcoming a global health crisis. The poster included in this issue is an ILRIG infographic which complements this article, and which provides information around why we need COVID-19 vaccines, debunks the myths surrounding them, and argues that we must urgently struggle for public and equitable vaccine development and distribution.

In Gender News, Alex Hotz analyses the budget crisis faced by the CCMA and its anti-worker response to this, which has intensely isolated and disempowered workers in the context of a pandemic and economic recession. She argues that due to the unequal opportunities, conditions and pay women workers already experience, and the extra burden of care they take on both in the home and workplace, women workers are hit hardest by the state’s assault on the working class.

Natasha Vally and Shaeera Kalla from the C19 People’s Coalition also provide a gendered lens in the Guest Article, as they reflect on the importance of continuing and ultimately expanding necessary social grants as a starting point for tackling the systemic and structural crisis facing the poor and working class in South Africa.

Continuing on the topic of worker struggles and building power in the context of severe economic and income inequality, this issue contains the first in new Educational Series written by Leila Khan on worker cooperatives. This first article in the series introduces worker cooperatives and contemplates to what extent they can create spaces for democratic, anti-capitalist principles and practices within a capitalist economy.

In International News, Shawn Hattingh turns to the powerful protests and strike actions taken by Indian peasants and farmworkers reacting to the fascist Indian government’s Farm Acts, and discusses the significance of this moment for the future of working class and left struggles in India.

Closer to home, Mabhelandile Twani from the July Movement writes in My Struggle about land occupations in Khayelitsha, and puts forward the argument that these are important protest actions which show communities taking back power in an historical context of land dispossession, and should be supported as such.

Finally, our Cultural Page contains a poem written by South African hip hop collective Soundz of the South, which does the important work – as sometimes only art is able to do – of emoting and personalising the impacts of the inequalities and oppression experienced under capitalism.