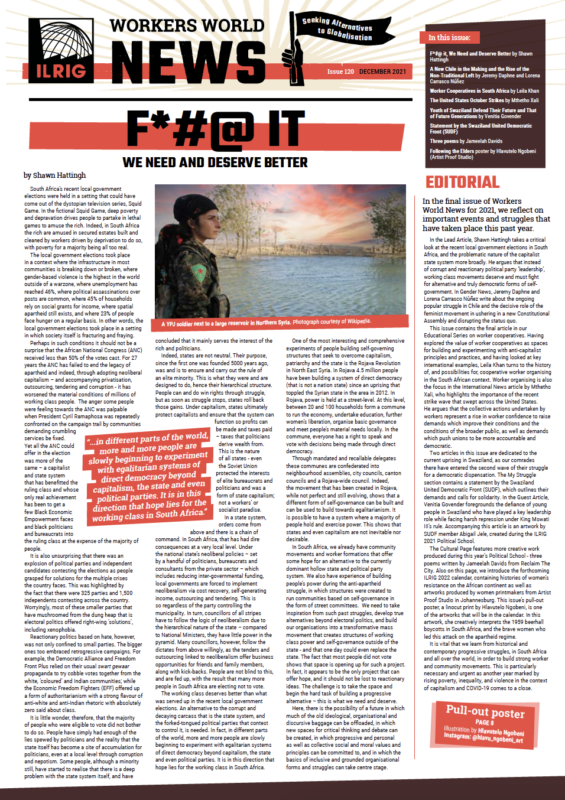 In the final issue of Workers World News for 2021, we reflect on important events and struggles that have taken place this past year. In the Lead Article, Shawn Hattingh takes a critical look at the recent local government elections in South Africa, and the problematic nature of the capitalist state system more broadly. He argues that instead of corrupt and reactionary political party ‘leadership’, working class movements deserve and must fight for alternative and truly democratic forms of self-government. In Gender News, Jeremy Daphne and Lorena Carrasco Núñez write about the ongoing popular struggle in Chile and the decisive role of the feminist movement in ushering in a new Constitutional Assembly and disrupting the status quo.

This issue contains the final article in our Educational Series on worker cooperatives. Having explored the value of worker cooperatives as spaces for building and experimenting with anti-capitalist principles and practices, and having looked at key international examples, Leila Khan turns to the history of, and possibilities for, cooperative worker organising in the South African context. Worker organising is also the focus in the International News article by Mthetho Xali, who highlights the importance of the recent strike wave that swept across the United States. He argues that the collective actions undertaken by workers represent a rise in worker confidence to raise demands which improve their conditions and the conditions of the broader public, as well as demands which push unions to be more accountable and democratic.

Two articles in this issue are dedicated to the current uprising in Swaziland, as our comrades there have entered the second wave of their struggle for a democratic dispensation. The My Struggle section contains a statement by the Swaziland United Democratic Front (SUDF), which outlines their demands and calls for solidarity. In the Guest Article, Venitia Govender foregrounds the defiance of young people in Swaziland who have played a key leadership role while facing harsh repression under King Mswati III’s rule. Accompanying this article is an artwork by SUDF member Abigail Jele, created during the ILRIG 2021 Political School.

The Cultural Page features more creative work produced during this year’s Political School – three poems written by Jameelah Davids from Reclaim The City. Also on this page, we introduce the forthcoming ILRIG 2022 calendar, containing histories of women‘s resistance on the African continent as well as artworks produced by women printmakers from Artist Proof Studio in Johannesburg. This issue’s pull-out poster, a linocut print by Hlavutelo Ngobeni, is one of the artworks that will be in the calendar. In this artwork, she creatively interprets the 1959 beerhall boycotts in South Africa, and the brave women who led this attack on the apartheid regime.

It is vital that we learn from historical and contemporary progressive struggles, in South Africa and all over the world, in order to build strong worker and community movements. This is particularly necessary and urgent as another year marked by rising poverty, inequality, and violence in the context of capitalism and COVID-19 comes to a close.