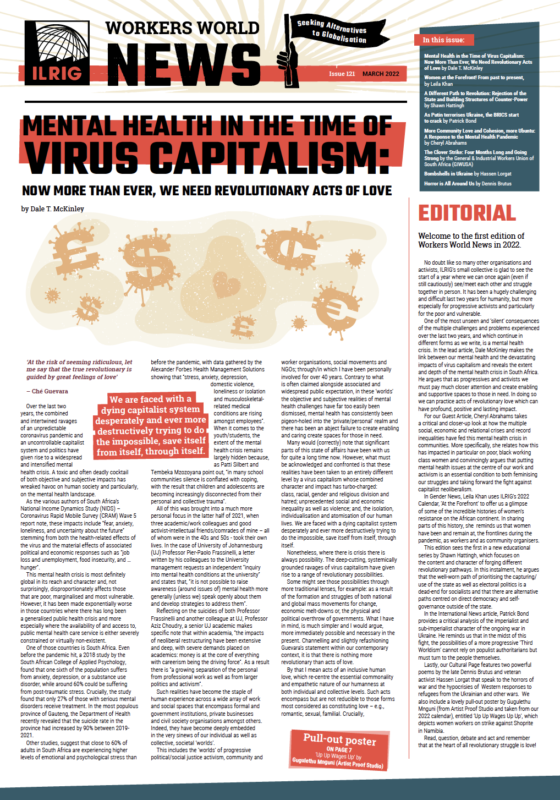 Welcome to the first edition of Workers World News in 2022.

No doubt like so many other organisations and activists, ILRIG’s small collective is glad to see the start of a year where we can once again (even if still cautiously) see/meet each other and struggle together in person. It has been a hugely challenging and difficult last two years for humanity, but more especially for progressive activists and particularly for the poor and vulnerable.

One of the most unseen and ‘silent’ consequences of the multiple challenges and problems experienced over the last two years, and which continue in different forms as we write, is a mental health crisis. In the lead article, Dale McKinley makes the link between our mental health and the devastating impacts of virus capitalism and reveals the extent and depth of the mental health crisis in South Africa. He argues that as progressives and activists we must pay much closer attention and create enabling and supportive spaces to those in need. In doing so we can practice acts of revolutionary love which can have profound, positive and lasting impact.

For our Guest Article, Cheryl Abrahams takes a critical and closer-up look at how the multiple social, economic and relational crises and record inequalities have fed this mental health crisis in communities. More specifically, she relates how this has impacted in particular on poor, black working class women and convincingly argues that putting mental health issues at the centre of our work and activism is an essential condition to both feminising our struggles and taking forward the fight against capitalist neoliberalism.

In Gender News, Leila Khan uses ILRIG’s 2022 Calendar, ‘At the Forefront’ to offer us a glimpse of some of the incredible histories of women’s resistance on the African continent. In sharing parts of this history, she reminds us that women have been and remain at, the frontlines during the pandemic, as workers and as community organisers.

This edition sees the first in a new educational series by Shawn Hattingh, which focuses on the content and character of forging different revolutionary pathways. In this instalment, he argues that the well-worn path of prioritising the capturing/ use of the state as well as electoral politics is a dead-end for socialists and that there are alternative paths centred on direct democracy and selfgovernance outside of the state.

In the International News article, Patrick Bond provides a critical analysis of the imperialist and sub-imperialist character of the ongoing war in Ukraine. He reminds us that in the midst of this fight, the possibilities of a more progressive ‘Third Worldism’ cannot rely on populist authoritarians but must turn to the people themselves.

Lastly, our Cultural Page features two powerful poems by the late Dennis Brutus and veteran activist Hassen Lorgat that speak to the horrors of war and the hypocrisies of Western responses to refugees from the Ukrainian and other wars. We also include a lovely pull-out poster by Gugulethu Mnguni (from Artist Proof Studio and taken from our 2022 calendar), entitled ‘Up Up Wages Up Up’, which depicts women workers on strike against Shoprite in Namibia.

Read, question, debate and act and remember that at the heart of all revolutionary struggle is love!