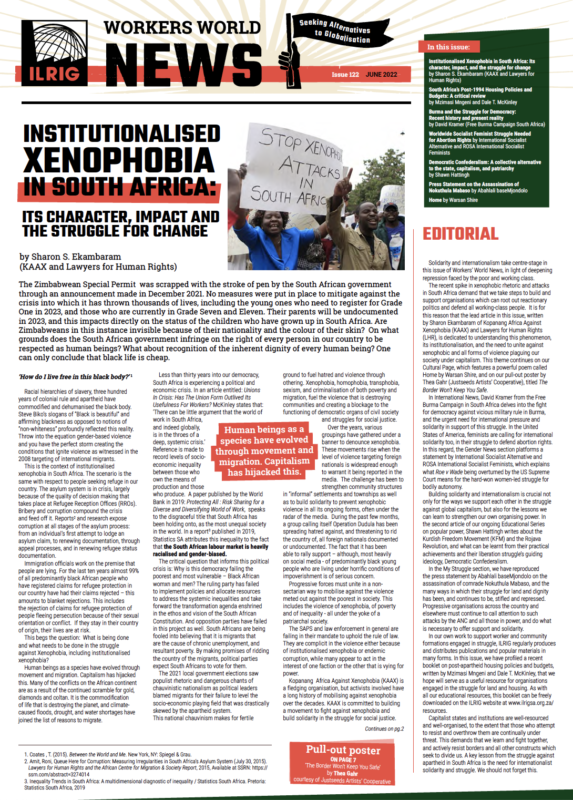 Solidarity and internationalism take centre-stage in this issue of Workers’ World News, in light of deepening repression faced by the poor and working class.

The recent spike in xenophobic rhetoric and attacks in South Africa demand that we take steps to build and support organisations which can root out reactionary politics and defend all working-class people.  It is for this reason that the lead article in this issue, written by Sharon Ekambaram of Kopanang Africa Against Xenophobia (KAAX) and Lawyers for Human Rights (LHR), is dedicated to understanding this phenomenon, its institutionalisation, and the need to unite against xenophobic and all forms of violence plaguing our society under capitalism. This theme continues on our Cultural Page, which features a powerful poem called Home by Warsan Shire, and on our pull-out poster by Thea Gahr (Justseeds Artists’ Cooperative), titled The Border Won’t Keep You Safe.

In International News, David Kramer from the Free Burma Campaign in South Africa delves into the fight for democracy against vicious military rule in Burma, and the urgent need for international pressure and solidarity in support of this struggle. In the United States of America, feminists are calling for international solidarity too, in their struggle to defend abortion rights. In this regard, the Gender News section platforms a statement by International Socialist Alternative and ROSA International Socialist Feminists, which explains what Roe v Wade being overturned by the US Supreme Court means for the hard-won women-led struggle for bodily autonomy.

Building solidarity and internationalism is crucial not only for the ways we support each other in the struggle against global capitalism, but also for the lessons we can learn to strengthen our own organising power. In the second article of our ongoing Educational Series on popular power, Shawn Hattingh writes about the Kurdish Freedom Movement (KFM) and the Rojava Revolution, and what can be learnt from their practical achievements and their liberation struggle’s guiding ideology, Democratic Confederalism.

In the My Struggle section, we have reproduced the press statement by Abahlali baseMjondolo on the assassination of comrade Nokuthula Mabaso, and the many ways in which their struggle for land and dignity has been, and continues to be, stifled and repressed. Progressive organisations across the country and elsewhere must continue to call attention to such attacks by the ANC and all those in power, and do what is necessary to offer support and solidarity.

In our own work to support worker and community formations engaged in struggle, ILRIG regularly produces and distributes publications and popular materials in many forms. In this issue, we have profiled a recent booklet on post-apartheid housing policies and budgets, written by Mzimasi Mngeni and Dale T. McKinley, that we hope will serve as a useful resource for organisations engaged in the struggle for land and housing. As with all our educational resources, this booklet can be freely downloaded on the ILRIG website at www.ilrigsa.org.za/resources.

Capitalist states and institutions are well-resourced and well-organised, to the extent that those who attempt to resist and overthrow them are continually under threat. This demands that we learn and fight together, and actively resist borders and all other constructs which seek to divide us. A key lesson from the struggle against apartheid in South Africa is the need for internationalist solidarity and struggle. We should not forget this.