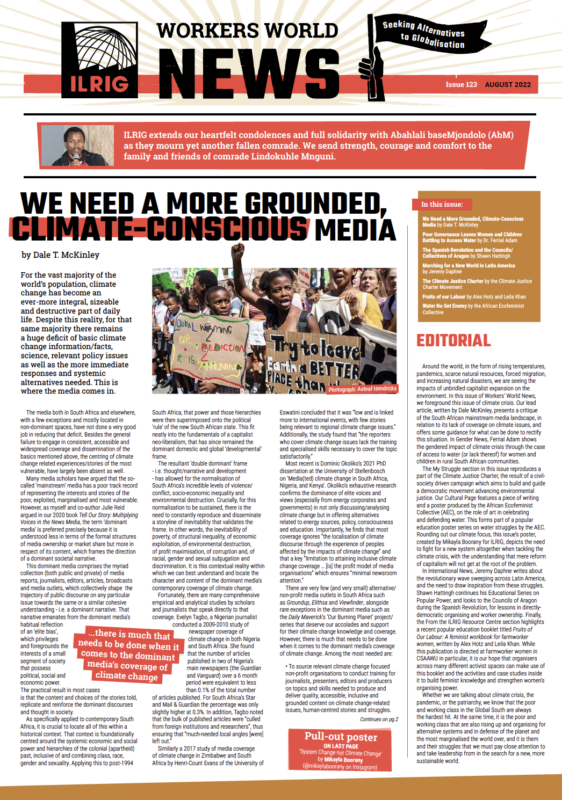 Around the world, in the form of rising temperatures, pandemics, scarce natural resources, forced migration, and increasing natural disasters, we are seeing the impacts of unbridled capitalist expansion on the environment. In this issue of Workers’ World News, we foreground this issue of climate crisis. Our lead article, written by Dale McKinley, presents a critique of the South African mainstream media landscape, in relation to its lack of coverage on climate issues, and offers some guidance for what can be done to rectify this situation. In Gender News, Ferrial Adam shows the gendered impact of climate crisis through the case of access to water (or lack thereof) for women and children in rural South African communities.

The My Struggle section in this issue reproduces a part of the Climate Justice Charter, the result of a civil-society driven campaign which aims to build and guide a democratic movement advancing environmental justice. Our Cultural Page features a piece of writing and a poster produced by the African Ecofeminist Collective (AEC), on the role of art in celebrating and defending water. This forms part of a popular education poster series on water struggles by the AEC. Rounding out our climate focus, this issue’s poster, created by Mikayla Boorany for ILRIG, depicts the need to fight for a new system altogether when tackling the climate crisis, with the understanding that mere reform of capitalism will not get at the root of the problem.

In International News, Jeremy Daphne writes about the revolutionary wave sweeping across Latin America, and the need to draw inspiration from these struggles. Shawn Hattingh continues his Educational Series on Popular Power, and looks to the Councils of Aragon during the Spanish Revolution, for lessons in directly-democratic organising and worker ownership. Finally, the From the ILRIG Resource Centre section highlights a recent popular education booklet titled Fruits of Our Labour: A feminist workbook for farmworker women, written by Alex Hotz and Leila Khan. While this publication is directed at farmworker women in CSAAWU in particular, it is our hope that organisers across many different activist spaces can make use of this booklet and the activities and case studies inside it to build feminist knowledge and strengthen women’s organising power.

Whether we are talking about climate crisis, the pandemic, or the patriarchy, we know that the poor and working class in the Global South are always the hardest hit. At the same time, it is the poor and working class that are also rising up and organising for alternative systems and in defense of the planet and the most marginalised the world over, and it is them and their struggles that we must pay close attention to and take leadership from in the search for a new, more sustainable world.